This year sees Donegal return to the senior football final, albeit without Diarmuid Connolly, who will be togging out for The Dubs in the All Ireland Final in a couple of weeks.  Connolly’s St. Vincent’s teammate, New York born Shane Carthy, will be lining out in the middle of the field and hoping for a second successive Boston senior championship medal.  Alongside him will most likely be the athletic Westmeath and former Aussie Rules player, Ray Connellan. 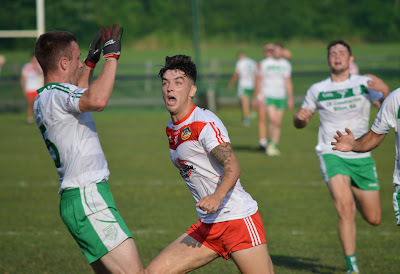 Up front Donegal have a powerful one – two strike force in Gary Walsh and Barry John Keane.  In last week’s semi-final the place kicking of Walsh was impeccable, the Laois man hardly missed a kick from any distance or angle.  Keane, the Kerry footballer, is liable to pop up and put the ball over the bar from anywhere and I would not relish the thought of having to mark either as a McAnespies defender.


In defence, Hugh “Yank” Boyle is minding nets, and the home based Donegal keeper is second to none when it comes to stopping those point blank chances.  Continuing on from where he left off last year, Boyle has been a major factor in Donegal’s success.  The back line is solid, with Jason Noctor and there is nothing like a Donegal team when it comes to locking down things at the back.


McAnespies are back in the final after a one-year hiatus and have not lost a game this season.  The team is built on a combination of power and finesse, and has ground down opponents into submission.  The centerpiece of the forward line is Tony Brosnan.  The Dr. Crokes, Killarney, man is a finesse player who can set up his colleagues with well-placed passes, or take his own score when the situation calls for it.  Also in the forward line is Steven O’Hanlon who got his Monaghan call up this year.  The Carrickmacross native adds some speed to the forwards, while also in the forward line is Evan Cronin who has been as consistent a performer for McAnespies as any this year.


Captain, Declan Hughes is a force to be reckoned with in the middle of the field, along with Barry Kerr.  However, it is the half back line that is the key to McAnespies success so far this year.  Daniel Guinness, Pierce Laverty and Oisin McConvey have driven the team forward throughout the season.  The 3 Down men will have a huge role to play in the outcome of this game.  McAnespies will face their biggest test of the year on Sunday, however, one would have to make them slight favourites to continue their winning ways.  One interesting footnote, Sean Cournane, whose brother Anthony starts in the half forwards, is on the panel.  Cournane was corner forward on the 2011 North American winning team that went unbeaten all season.  Will the Caherciveen man be a talisman 8 years later?  Sunday will tell all.  An exciting game to look forward to.


Fr. Tom’s are the clear favourites in this battle of the westerners. The game will almost be like a Galway club final such are the links between each club and the county of the Tribesmen.  Tom’s topped the senior hurling table and after a slow start to the season, impressed from then on.


The jewel in the crown is Galway intercounty star, Conor Whelan.  Whelan is a hard working corner forward, who digs in and persists until possession is won and a positive outcome achieved.  In a previous encounter, Galway had their game plan to snuff out the Kinvara dangerman, and were largely successful but in injury time it was Whelan who netted the winning goal for Tom’s. 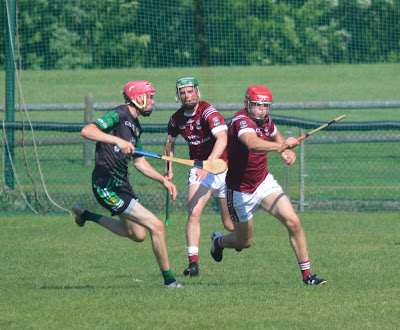 Alongside is Jack Coyne, another player with top flight intercounty credentials.  Coyne suffered an injury earlier in the season, and may not be 100% but is still likely to be a player that Galway need to plan for in the final.  Tom’s are strong throughout the field.  From Ian O’Shea at corner back to Ali Dooey at corner forward, there is hardly a weakness in the side.  Flying the flag for the USMC (United States Marine Corp.) is Paul Cannon.  The Craughwell Co. Galway native served in the Marines before coming to Boston and joining Tom’s, and is a major addition to the home based ranks of the club.


Tom’s defeated their finalist opponents fairly handily in their last outing, however, it was a game that had nothing riding on it as both teams were already in the final, and playing cards close to the chest no doubt.  Galway gave Tom’s a good run in their last meaningful meeting and were very unlucky not to come away with the win.


A well-coached team, Galway players will be fully aware of their respective jobs and what is required if they are to defeat Tom’s.  The defence will need to work hard for the fill hour to limit Tom’s scoring opportunities.  Last time out the defence, led by Brian Kennedy and Aidan O’Sullivan, did extremely well in executing their task, until the very end of the game when Whelan popped up for that goal.


There is plenty of grit in the team, none more so that with Danny Burke.  The Headford man will need to keep his head though, and focus on the task at hand.  Niall Walsh in the forward line is a goal getter, the Kilkenny native knows where the posts are.  Lorcan McLaughlin is well capable of taking the scores and along will captain, and Carlow man, Adam Kenny will need to take advantage of the opportunities to keep Galway in the hunt.  An entertaining game with some top class hurling is in store.
By Rory O'Donnell