In what is a preview of the Senior Hurling Championship final Father Toms faced Galway in the final league game. Both teams held their cards close to their chest as they played alternative teams. The last time the teams met, Tom’s were the victors, would they be able to once again be victorious and overcome a strong Galway side. 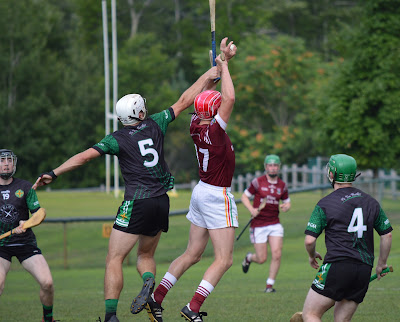 The game started out evenly as Dunloy native Ali Dooey got two quick frees to open the scoring. The two teams would go back and forth as Niall Walsh and John Moylan for Galway, and Darragn McGrath for the Toms would score for their sides. Galway started to push on for a bit and managed to get a two point lead. However, this would be the start of a scoring drought for Galway,as Tom’s would score a few points. It would go from bad to worse as Cian Salmon former Galway Minor would score a great goal, He received a pass from a sideline cut, and ran in to the square/ His initial shot was saved, then Salmon struck in off the ground. Tom’s would continue to score a number of unanswered points from Ian O’Shea, Darragh Mcgrath, Cian Salmon and Rory Purcell. Unfortunately, it wouldn’t kick into gear for Galway as the Tom’s would power on and shoot for fun as they went on to win the match 4-32 to 1-14.
In what was expected to be a non event, lead to a shockingly dominant victory for the Tom’s as they build the momentum for the Senior Hurling Final in two weeks time. Will Galway be able to work on this loss and push on to turn the tables against the Tom’s? Only time will tell.
Father Tom’s - Kevin Flynn, Brian Flynn, Ian O’Shea, Jason Costello, Eamon Egan, Matt Kenny, Rory Purcell, Saen Downey, Conor Costello, Darragh McGrath, Johnny Buckley, Cian Salmon, Ali Dooey
Galway - John Coleman, Mark Bermingham, Ronan Burke, Niall Walsh, Andrew Casey, Michael Moylan, Danny Burke, Kenneth O’Callaghan, Adam Kenny, John Moylan, Greg Lundy, Cormac Kelly, Aidan Joyce
Intermediate Football


Shannon Blues and Christophers met up in their final league match. Shannon Blues had already qualified for the Finals where they will face Cork.
Christophers started the game strongly, scoring a number of unanswered scores with points from Kenny O’Reilly, Mark Delaney, Fionnan O’Shea and Gerry Bannon. Blues Would get a point from Paddy O’Connor, and then Joe McHugh would get a goal to level the game early on. The game would remain close , with scores from both sides, until the Blues went on a scoring spree, scoring a number of goals and points. The Christophers would respond with scores of their own, however, the damage was too much, and the Shannon Blues were victorious.
With this result, the Christophers end their season on a low, having only won one game in the season. However I’m sure that they’ll regroup, work on what they learned and push on once again in next years Intermediate Championship. The Shannon Blues will face Cork in the Intermediate final in two weeks time.
Shannon Blues: Michael Moriarty, Shane Kelly, Brian Fannon, Conor Mullen, Tom Hannon, Eamon Kilgallon, Pat Murray, Paddy O’Connor, Joe McHugh, Darren Wallace, Conor Fitzgerald, Ger Comer, Michael Moylan
Christophers : Mark Molloy, Gerry Bannon, Martin Coppinger, Gareth Barr, Shane Power, Tom Kinsley, Ian O’Callaghan, Jerry Kenneally, Kenny O’Reilly, Mark Delaney, Bryan Herirly, Fionnan O’Shea, Dan Kenneally
By Evan McDonagh
Posted by Rory at 7:06 PM