With the Boston GAA season well over by now, I wondered what a Pick of Boston football team would look like. When I started writing reports on the games in Canton almost 10 years ago, Boston All-Star football and hurling teams were a fairly easy pick as there were so many home based players. In fact, until two years ago, there was an All-Star banquet where home-based players were recognized with All Star and player of the year awards. Things have changed drastically in the time since. Clubs are working harder than ever to field top quality teams, trying coax the veterans into giving one more year, and filling out the home base with early arrivals. There have been some positive developments on the home-based front however. There are American Born players now coming through the youth systems that have been in place for more than 10 years. Brendan Kelly and Dan Kenneally, who play with Christopher’s, and Pat Murray with the Shannon Blues, make my Boston team, however, there are also American Born players coming through with other clubs who will make their mark at the highest level in the years to come. In addition, many of the junior football teams are seeing increasing numbers of kids who have learned the game here in Boston filling their ranks, and many will progress to senior level. The New England Celtics, a team composed entirely of local boys, with nary a sanction player to be found, made the semi-finals in their first foray at Junior A level. Also, right at the root, there is a growing youth league. There are now more than 6 underage football clubs in the New England area compared to one youth program 3 years ago. All that, combined with the hurling clubs in New Hampshire and Maine, means that the GAA is becoming more deeply rooted in the New England area then it ever has been.
﻿﻿
﻿﻿


Right Half Back: Brendan Kelly (Christopher’s)


Center Half Back: Neil Donaghy (McAnespies)


Left Half Back: Sean Gallagher (Galway)

The Connemara Gaels junior B team went to Chicago for the North American County board finals, and came back with the junior B shield to add to their Boston Junior B championship.  Many players got the first plane from Logan Friday morning to be in Chicago for the first game Friday afternoon, and the Boston representatives were defeated by a score of 3-13 to 0-8 by the Chicago Patriots.  Fatigue worked against the Boston side, and the local team's superior fitness eventually wore down the Gaels.  The Chicago side went on to win the championship.


However, the Gaels still had a chance to take some silverware home in the shield competition.  The following day the Gaels beat the Pittsburgh Celtics by a score of 3-19 to 1-4 in the quarter final.  Sunday morning was the semi versus the LA Wild Geese and it was the Boston boys that came out on top of this opposite coast battle by 1-20 to 2-3.  Martin Kerr's intrepid heroes faced Charlotte in the shield Final and came out on top by a score of 1-22 to 1-4.  With silver coming in at this rate an extra shelf will have to be installed behind the bar at JJ's on Dorchester Ave. 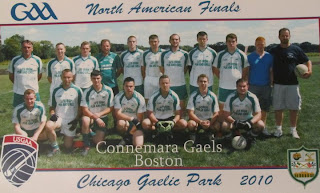 The Boston Shamrocks junior ladies did not fare as well and were beaten by San Fran in the semi-final.  Like wise the junior C hurlers from Partland Maine who beat Denver in the quarter final, but were soundly defeated by eventual winners Chicago Cusacks in the semi-final.
Posted by Rory at 10:30 AM No comments: