The year got kicked off last Saturday evening at the Irish Cultural Centre with a very successful Annual General Meeting.

Delegates from all 24 clubs were in attendance as well as current and former divisional and USGAA chairpersons, Joe Lydon, John McDevitt, John Farrell, Bernie Reilly, and Bernie Connaughton.

The board officer’s reports were well received and reflected on what was a very successful return to action in 2021 following the COVID related layoff in 2020.  An all home based championship season went well was a great way to get the ball rolling heading into 2022.  Chairperson, Peter Murray’s address was full of thanks to all of the volunteers who helped with organizing and staging the games over the course of the season.   The USGAA finals in August were also a major success and the organizing committee were thanked for the work that went into hosting a great weekend of Gaelic sports.

There were a handful of motions to discuss and vote upon.  One to do away with floating players for men’s football did not pass, while several motions to update the bye laws for the division were passed. 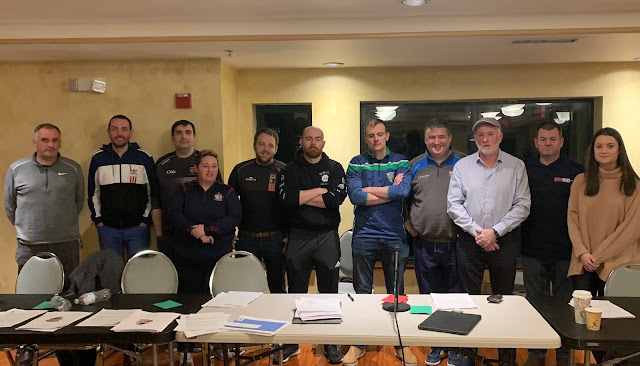 The committee for the 2022 season was elected, although no voting was required as most officers returned to their positions unopposed.   Evan McDonagh (Assistant Secretary) and Dave “Fly” Power (Trustee) stepped down and in their places came Eoin Casey and Frankie Maloney.  John McDevitt was nominated as honorary President and accepted.   The Board for 2022 is:

The Feile Committee is organizing a Nite at the Races at the Cottage Bar in Weymouth on March 26.  Adult clubs are asked to support the event which is so important to support the U15 boys and girls teams traveling to Ireland in June.  Contact Karen Nugent to sponsor a race or a horse.

April 30 the Wolves Hurling Club are organizing a 7-a-side in Merrimac NH.  Please contact the Wolves for additional information.  The club also has plans for a tournament at the end of October that will be open to clubs across the USGAA, and the clubs has the lofty goal of opening a full size GAA field in Merrimac!  It would be a first for the Granite state and great development.

There were other items for discussion such as games development, organizing a First Aid/CPR course for clubs to attend, and advertising and promoting the games.

We look forward to the coming season and a bigger and better one in 2022.