Finally the season picked back up following what seemed like a lengthy break between the July 4 holiday and weather related postponements.  Championships are reaching the business end of things and the next week will sort out a lot.

There were interesting developments in the Junior B football championship with some make-up games in mid-week.  Kerry had to play a Tuesday and Friday night games against Christopher’s and Sean Og’s respectively, and in each went down narrowly; a 4-11 to 3-10 loss to Christopher’s was followed by a 2-12 to 3-8 defeat to Sean Og’s.  The results put Kerry hoping that Christopher’s can defeat the Connemara Gaels next Sunday, or that Trinity can turn Sean Og’s Tuesday night to keep the Kingdom in the picture with a playoff for a semi-final place.  Donegal and Christopher’s are in, and if the Gaels and Sean Og’s also win their games, these are the 4 semi-finalists.


The Senior Football championship saw Donegal and Aidan McAnespies face off in an ill-tempered affair that saw a 25 minute delay after McAnespies goalkeeper Jack Lake carted off in an ambulance after he fell awkwardly on his back and could not get up.  Latest news was that Jack was up and walking and we wish Jack all the best for a full recovery.  The game took a long time to pick up any kind of head of steam, with injury delays and the 4 weeks layoff clearly having affected both teams.  The first score of the game was a Nicky Kelly goal with the assist from Sean Winston.  Winston added a point for Donegal late in the disjointed half, and Peter O’Connell saved McAnespies blushes with a pointed ’65 before the break to make it 1-1 to 0-1 in Donegal’s favour.

The second half was much improved with both sides more cohesive.  Donegal opened a 7 point lead with a string of scores from Lee Carr, Kelly and Shane Carthy.   Robbie Croft provided hope for the Macs, scoring 4 points, 3 frees and nice point from play and with 4 points between the sides, McAnespies pushed Donegal for the last 10 minutes and applied some pressure to the northerners defence.  Donegal kept the door closed, and finished the game with a Shane Carthy goal and point to put the game to bed.  Donegal still to lose, and will face the Connemara Gaels next Sunday.


The Junior A football championship also had a mid-week victory for Galway over Cork to keep that competition open heading in the decisive last few games.  Sunday also featured an interesting match where the Wolfe Tones pulled out a 1-10 to 0-10 victory against Cork, all in spite of having to keep a trio of injured players on the field.  Pa Collins turned in a warriors performance, in spite of having one leg for balance only, Collins was involved in much of the play down the stretch.  In first half it was Shane Hayes the hero with 3 great saves to deny Cork goals, and there were some well taken point from both sides.   The second half was also neck and neck and Thomas Beckett’s goal late in the game proved to be the decisive score.
On the hurling front, the Junior C final will be contested between Hartford and Providence in 2 weeks time with both teams seeking their first title in the grade.  Junior B hurling is wide open, while a Tom’s v Galway senior hurling final is on the cards after Tom’s won easily over Offaly on Sunday afternoon.

Lot’s to looks forward to in this novel all home-based season, and the USGAA finals coming up the weekend of August 20.

Play resumed at the Irish Cultural Centre a week later than planned due to the heavy wet weather that the Northeast has been experiencing in the last couple of weeks.  Unfortunately, the main field was out of action and the rain stayed away long enough to get some games in on the back field.


The main event this week was the senior football match between Connemara Gaels and Shannon Blues which had to be played in the tight confines of Field B.  The Gaels got off to a great start with an AJ Maguire goal after he was fed by PT Cunningham.  The game was end to end in the early going, but it was the Gaels who converted in the scoreboard.  Cunningham and Paddy McGee, both men perhaps on a high following Tyrone’s Ulster championship win earlier in the day, were on the mark with points and Blues first score of the came from Maurice Young came mid-way through the half.   The Gaels were in control with Jack Bambrick very much in charge in the middle of the field.  McGee netted just before half time, to put the Gaels beyond reach.  The score of the game was a great second half goal where Colman Mulkerrin exquisitely found Cunningham who drilled his shot to the far side of the net.  The Blues battled gamely and scored a consolation goal from Young late in the game, final score, Gaels 4-19 Blues 1-4.  Next up are Donegal and Aidan McAnespies in a makeup game Tuesday evening at 6:30pm.
In Junior B football action Donegal put themselves back on top of the table with a handsome 3-14 to 0-8 win over Christopher’s, with Ashley Carr helping himself to 2-8 in the process.  Kerry got back to winning ways with a 1-16 to 1-6 win versus the Connemara Gaels.

High flying Providence suffered their first defeat of the season falling on the road to Hartford by a score of 3-16 to 3-12 but still sit on top of the table with 3 wins from 4, while the newly formed Worcester football team scored a win over Portland on Saturday after narrowly falling to Sean Og’s during the week in a makeup game.

Hopefully the weather holds up during the week to allow for make-up games and a return to regularly scheduled times.  If there is a silver lining in all of this – the main field looks in immaculate condition. 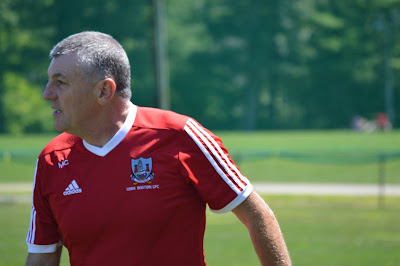 A word from Mike Caodgan.  Mike broke his ankle recently and is having a rough time with the recovery which requires another surgery.  Mike will be off his feet for quite a while it seems.  A long time and dedicated servant to the Cork Boston GAA Club, a fund raiser was held recently and here are Mike’s words of thanks:

“I’d like to thank everybody who bought or sold a square for the Munster final fundraiser. This is what makes the Gaelic athletic association the greatest organization in the world because why the passion and the rivalry is intense there is also the very generous side of people and in time of need we all come together. Best of luck to everybody in the drawer thank you the Cadogan family.”

Results and schedules at www.gaaboston.com