The weekend opened with a maiden voyage for Trinity Milton who fielded a team in the junior B football championship after starting the club 12 years ago with a small group of 6 and 7 year-olds.  The youngsters faced an experienced Kerry team that taught them a lesson or two and ran out 3-17 to 0-4 winners.  Lessons learned for the young Americans, whereas Kerry have been knocking on the door of the junior B championship title.  Over the last few years the Kingdom has built a solid base to launch a challenge.  For Trinity it was a big night with a large support, and getting a team on the field was a victory for the club in itself.  It was the first championship game played on the main field, which was in immaculate condition, since August 2019. Full match report is available on the Kerry Boston Website (https://kerrybostongfc.com/2021/06/07/726/).

Saturday saw Canton stuck in dead 90 degree heat and there were 4 games on.  Two hurling matches were played on the main field.  The first saw another team of Home Grown players, Sean Og’s, take on the Worcester Fenians.  The Fenians held the lead for most of the game with old hands Liam Kelly, Tom Lind and Conor Greene keeping them just about in the lead.  Sean Og’s struck late, however, and a couple of excellent points from Aidan O’Malley were followed with a goal at the final whistle by Mike Moylan that propelled Sean Og’s to a 2-13 to 1-13 win.

Junior C Hurling action followed with Portland traveling from Maine and Hartford from Connecticut to meet in a game that Portland always looked like the side that would claim the spoils.  A couple of first half goals put Portland in the driver’s seat to lead by 2-8 to 0-6 at the break. Hartford managed to put some respectability on the scoreboard with some late scores, final score 4-14 to 2-9 for the boys from Maine.

Football action on the back field saw the Sean Og’s footballers in another close game with a solid looking Christopher’s team.  With the game in the balance throughout it was Christopher’s who edged it by a score of 3-8 to 3-7.  Junior C football saw Worcester field for the first time in the big ball game against the Portland Fomorian footballers.  It was another victory for the Mainers as they defeated the newcomers by a score of 3-7 to 2-4. 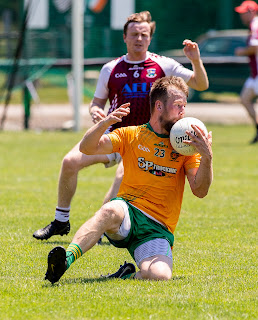 We then had the start of the Senior Championship, where we saw 2019 Senior Champions Donegal take on Galway. In what started out as an evenly balanced match, with Galway being unlucky with a number of wides, while Donegal chipped away at the score. 2 great saves from the Galway shot stopper further aided their survival ambitions, however, as the match went on, Donegal’s Shane Carthy and Cory Gallagher slotted away a number of goals and points to run away with the match. Galway managed to score a few consolation points but conceded the match 4-20 to 0-05.

In the next match of the Senior Football Championship, we saw Shannon Blues face Cork, in what was a repeat of the 2019 Intermediate final. Both teams started strong, scoring a point each from play, however, as the match went on, the Shannon Blues kept racking up the scores, eventually winning 5-18 to 0-05. 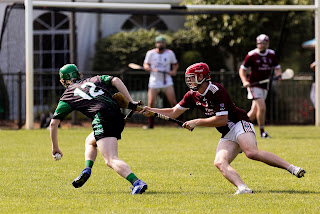 Next to come was the start of the Senior Hurling Championship, with once again, the finalists from 2019 facing each other, as Fr Toms faced Galway. The game started off even, with both teams starting strong and going point for point, with John Moylan doing the weight of the scoring for Galway, and Jason Costello doing likewise for the Toms. The deadlock was eventually broken by Chris O’Donoghue who scored the first goal of the game. As the game went on, it got very heated, and tempers started to flare as a skirmish ensued which saw Danny Burke for Galway and Jack Martin for Toms get their marching orders. With a game full of action the start of the 2nd half saw Galway save a penalty, and a highly attacking game as each team added to their tallies in a closely contested battle, in which the Toms prevailed with a 3-18 to 2-17 victory.

By Evan McDonagh and Rory O’Donnell