Mayo will have come away from this game regretting having missed a golden opportunity to win at least a point off one of Boston’s big guns. The game was hard fought and in the end decided by the narrowest of margins, which in no way flattered Mayo. Both defences were in the ascendancy for most of the game and the forward lines struggled to find any rhythm or range. Mayo had numerous chances that could have won them the game, but the McAnespies back line held firm in the final ten minutes to preserve the win. 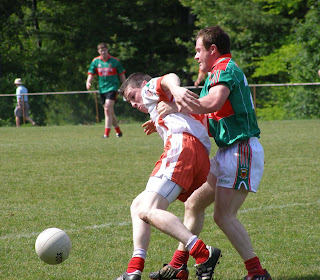 It was a hard fought contest between Macs and Mayo.
After one half of well contested, but disjointed play, McAnespies held the slightest of advantages. Having enjoyed more of the possession, McAnespies were a little guilty of overplaying the ball. Mayo, on the other hand, made the most of their chances. It was Mayo who opened the scoring with a free from the returning Dara McLaughlin, and Colm McCrory responded likewise for McAnespies. The sides then struggled to find a pattern to their play and a long scoreless spell ensued. Mayo’s David Carroll put the westerners ahead with a well taken point from distance. McAnepsies corner forwards , Kevin Brady and Dermot McCrudden then pointed three times between them to open a two point lead. McLaughlin finished the half with another free for Mayo to make it 0-4 to 0-3 at the half. 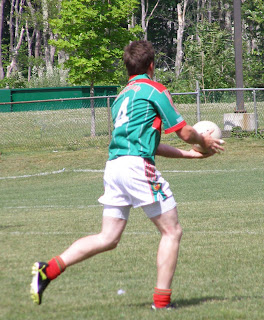 Does this pass the new handpass rule?
The second half followed a similar pattern. Mayo’s attacking efforts often ended in the hands of McAnespies corner back Martin Bogue, while Mayo’s Ciaran McLaughlin and Sean Clifford made life difficult for the McAnespies front men. As with the beginning of the first half, McLoughlin and McCrory traded points from frees. It would remain that way until 19 minutes in when Kevin Brady made up for a poorly attempted shot with a rifled score from 30 yards. Mayo’s efforts then took on a new sense of urgency and the westerners rallied upfield. A goal looked on at one point following one of the better moves of the half, but Shane Connolly got down well to save from Alan Benson. Mayo cut the lead to a point again with another McLaughlin free with five minutes to go. In an exciting last 5 minutes both sides narrowly missed scoring chances down the stretch as the game was up for grabs. Martin Bogue made the last block of the game to deny Gabe McTaggert the equalizing point, and McAnespies escaped with full points from an unexpectedly tough encounter.
Macs: S. Connolly, M. Bogue, N. Clancy, D. Wylie, C. O’Sullivan, C. O’Sullivan, D. Tobin, B. McGarr, N. Donaghy, G. Hennessy, C. McCrory (0-2), C. Clarke, K. Brady (0-3), D. McCrudden (0-1). Subs: S. Magill,C. Dempsey. Mayo: A. Townsend, S. Clifford, F. Coyne, M. Carolan, K. Comer, C. McLaughlin, G. McAllister, S. McDonagh, D. Carroll, G. McTaggert, K. McAllister (0-1), D. McLaughlin (0-4), A. Benson.