Boston GAA Finals - Donegal Make it 3 in a Row, Galway Pull Off a Shocker

Room must be running out in the Boston Shamrocks trophy cabinet after another victory in the ladies football championship.  The Shamrocks came up against the youthful Sean Og’s Ladies team, a team of home grown players who have just come up from underage ranks to play at adult level.  The Shamrock’s experience and strength was too much for the Sean Og’s to handle, but to their credit the youngsters never let up with their efforts and often had the Shamrocks goal under pressure, but the finishing touch failed them on many occasions.

Sarah Jane McDonald and Marie Kelly were to the forefront of the Shamrock’s efforts and when play went through those players the end result was usually a score for the champions.  Two early goals put the Shamrocks in the driver’s seat.  The Sean Og’s girls moved the ball well themselves on occasion, and were in with goal chances themselves, but Kayla Donovan was solid in goals for the Shamrocks and saved several would – be goals.  There were some points, Orla Gormley and Aisling Kelly got on the scoresheet, but a flurry of scores before half time for the Shamrocks put the outcome beyond doubt.

The second half opened with a goal from Eva Gannon for the youngsters, but Shannon Kelly took the breeze out of Sean Og’s sails after the got it back soon afterwards.  The Shamrocks brought on many campaign veterans, AnnMarie McDonnell, Stacy Fuller and Cathy McEleaney all came on and saw out the game.  A tough first final for the Sean Og’s girls, but for them it is just the beginning of what hopefully will be the beginning of successful football careers.  Shamrocks 8-11 Sean Og’s 1-6 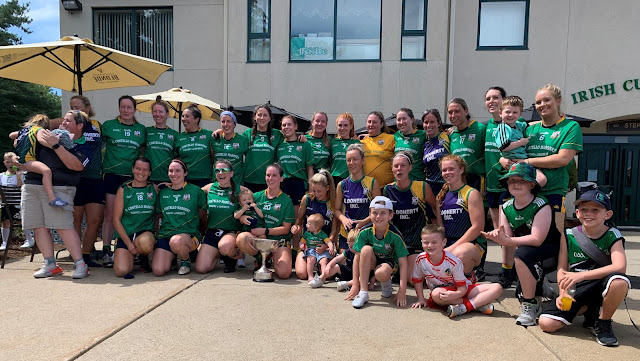 Aidan McAnespies won the Intermediate football final with a 3-9 to 1-5 against the Shannon Blues.  The Blues came out full of intent and were only 4 points adrift at the break, however, as the second half wore on McAnespies pulled away with 2 goals and flurry of points to finish the game.

An early Eoin Gormley goal after the throw-in had the Blues on their heels from the get go.  The Blues had a couple of goal chances of their own, but Paddy Coakley was sharp to the danger and managed to keep the ball from crossing the line.  Darren Wallace and Maurice Young pointed for the Blues to get them off the mark, however, the Macs finished the half with 3 unanswered points to hold a 1-3 to 0-2 lead in a fairly low scoring opening period.

The game was taken by the scruff of the neck by the Macs in the second half.  After the sides traded points, a Gormley point was followed by a super one from Peter O’Connell, and a Steven Ward goal.  An O’Connell run made the opening for Ward to net.  The Blues won a penalty after Wallace was pulled down in the box, and Young blasted the kick home to cut the gap to 6 points.

The final quarter saw McAnespies push for the finish line, Conan McCusker bagged a goal following a well worked move, and points from Colm O’Malley and O’Connell put the finishing touches on the win.  The Blues will look back at several missed chances that could have kept their opponents within reach, but it has to be said that the club deserves huge credit for fielding a team, one that contained a healthy dose of home grown talent, in the top level football competition this season.    McAnespies play in the USGAA intermediate competition next Saturday where they will meet the Pittsburgh Celtics.  It will not be the first time the clubs have met, Pittsburgh and Macs played in the junior B competition in San Francisco in 2011, and game that Pittsburgh won.  Since then the Midwestern side have risen through the ranks to Intermediate level. 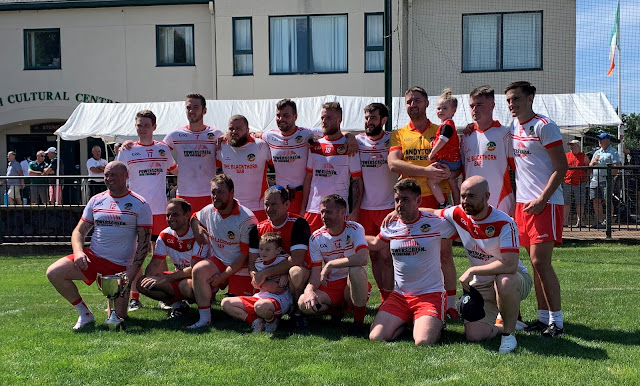 Galway hurlers pulled off the major shock of the weekend with a totally unexpected win against Fr. Tom Burke’s.   Tom’s would have been considered de facto champions going into the game because of the manner in which they were pretty much unchallenged in any game all season.  Galway saved their best performance till the final day, however, and after a tremendously exciting 60 minutes came out at the other end 2 point winners.

Galway came out on fire.  A combination of John’s, John Coleman and John Moylan, made things happen at the scoring end of the field.  Molylan had tallied 2 goals.  The first followed a great effort by corner forward JJ Doyle keeping the ball in play for Moylan to finish from close range.  The second was a high ball into the box that came off the fingertips of Tom’s keeper, Kevin Flynn, and into the back of the net.  Coleman was on the mark with the frees for Galway, and for Tom’s it was Fergus Byrne who was the danger man early.  Byrne tallied Tom’s first 3 points before further scores were added by Fran Keenan, Aaron Moore, Liam Moore and Jason Costello.  At the break Galway led by the 2 goals, 2-7 to 0-7.  The question was did they have enough of a lead to hold for the second half.

The short answer was yes, but it looked very doubtful coming to the run in to the final whistle.  The game continued at a blistering pace and players on both sides stepped up to try and make the difference.  Tom’s had it all square within 8 minutes after the restart.  A Liam Moore goal and points from Aaron Moore and Byrne before Galway managed a score had it looking like the tipping point was coming in Tom’s favor.  It did not happen.  Danny Burke, Patrick Moylan and Mike Moylan stepped it up at the back for Galway, and wily veteran going back to the Dilboy days, James Kinsella, won several balls.   The teams swapped 3 points each as the game hung in the balance.  It was Byrne for Tom’s, and for Galway John Moylan, Coleman and Eoin Morrissey kept Galway at parity.

Into the last 10 minutes and after John Moylan put Galway a point to the good, Costello finally broke from his marker to fire the ball home to the far corner of the net and put Tom’s 2 to the good.  Galway did not die, though and kept up their tenacious play.  Darragh Lawler and Eoin Morrissey won some fantastic ball in the air, and helped drive Galway forward.  The final 4 scores went to Galway.  Moylan got the tying point from play and Coleman held his nerve with the go ahead free, and added one other from playas Tom’s could not find the answer late in the game.  Final score, Galway 2-16 Fr. Tom’s 2-14.  It was a win for Galway over old rivals, Tom’s but it was also a win for hurling such was the passion with which the game was played, and for the home grown players in town.  Mike and Patrick Moylan, Aidan O’Malley, Eoin Morrissey, Liam Moore and Jack Martyn banging with the best of them out there was great to see.  A great game and one that hurling in the town needed for sure. 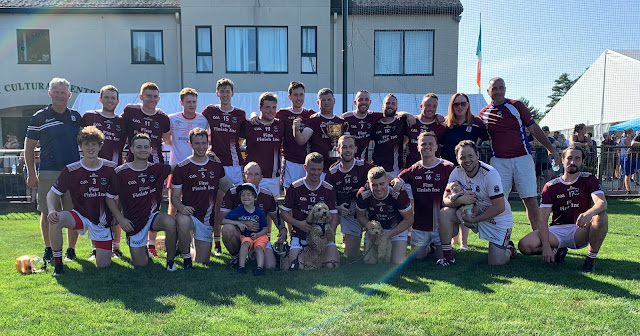 There was a lot of expectation that the senior football final would be one for the ages.  Although Donegal went the season unbeaten, and were going for 3 in a row, the Gaels had come close to getting one over on them in their earlier season encounters, and fancied their chances.  In the end the game went to the wire with no more than a score in it though the final 5 minutes, and it was Donegal who had the extra legs to see it through to a 4 point win.

The teams traded points to get things going and a goal chance for the Gaels ended with Hugh Boyle saving from Paddy Cunningham.  After Mikey Kerr put the Gaels one to the good in the early stages, Donegal hit with a goal from Shane Carthy.  The Gaels responded well with Sean Conneeley and AJ Maguire points to level it up again, and just as the westerners started to feel encouraged Donegal went 4 ahead.  Darren Grant took a massive mark inside the 14 and pointed from the kick, and Carthy again hit with a major and a fine finish.   The half ended with Caffrey and Niall Egan points, and a difference of 4 points.  Donegal 2-3 to 0-5 for the Gaels.  There were some testy moments with yellow cards issued to Kieran Killeen and Sean Winston from each side.

The second half opened with Donegal maintaining the distance between the teams.  Enjoying the better of the midfield and ball possession battle, the northerners looked to be the team in control.  The lead was extended to 5 with Carthy getting the odd score of 5 10 minutes into the second period.  The Gaels battled well and Jack Bambrick established his presence in the game.  Bambrick pointed twice, and 2 Ryan Caffrey frees made it a one point game entering the final phase.  Enter Lee Carr and his left foot, who had been quiet thus far, and back to back points from the corner forward opened the gap to 3.  Another Caffrey free got it back to 2, and a goal was on the minds of the Connemara men.  Donegal’s defence was stout, however.  Sean Conneeley had a half chance from inside the 14 that was blocked, and Sean Winston scored an excellent point at a critical time to put a goal in it again.  Into injury time Caffrey pointed for the Gaels to restore some hope and possession was key now.  Donegal were the side to win the all-important kickout.  Who else but Shane Carthy carried the team to victory with 2 points in the added minutes.  With 4 points in it, and well into injury time, it was all but over in spite of a last gasp effort to get a high ball into the net.  Three in a row for Donegal senior footballers who showed to be the best team in town this season.

A great game of football to finish out the first season with all home based or home grown players in the Boston-Northeast division.  It was season that saw old faces return to the games, and as importantly if not more, the home grown player’s contribution to the championships showed what the future looks like.  As chair of the divisional board, Peter Murray, noted, there are 24 adult clubs and this year 90 games on the schedule, and would not have been possible without the young American born players.  Continuing to nurture the talent coming through the youth pipeline from 6 and 7 year olds, to 15 and 16 year olds, and providing the opportunities for the players, shows that a bright future to be grasped for Gaelic games in the region. 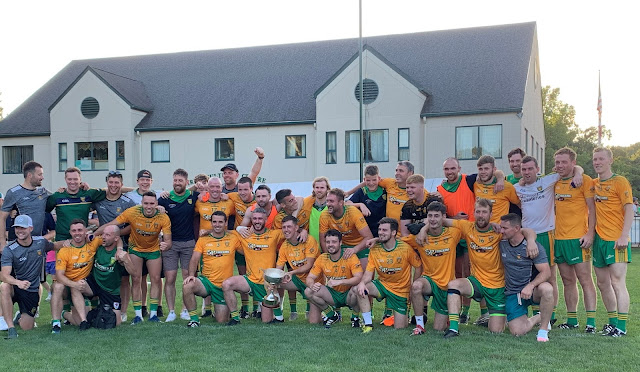 On to the USGAA Finals next weekend at the Irish Cultural Centre in Canton.