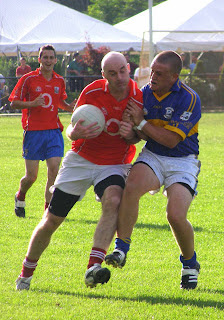 Corks' Kieran Connolly gets a Firm Challenge from Caolan O'Grady

Cork’s season of woe continued as the Shannon Blues won convincingly with Cork having played reasonably well for periods of the game. The Blues were always a little bit ahead of Cork in most areas of the field, however. The only real threats for Cork up front were Niall Devlin and Mike Moynihan, while the Blues has some scoring threats in Gary Gaughan, Philip Lydon, and Thomas Cryan, amongst others. The Blues had established a six point lead by half time, and early in the second half Devlin netted to bring the rebels within three, but Lydon answered in kind for the Blues a minute later to stifle any chance of a Cork comeback, and make the outcome a foregone conclusion.
Devlin opened the scoring for Cork in the first half with a well- taken point, and was answered by Darren Wallace for the Blues. Another Devlin point was answered by Lydon. Mike Moynihan then put Cork ahead for the last time in the game with a good score after 10 minutes, and the Blues scored 1-3 without reply for the remainder of the half – and did not look back. Gary Gaughan was a threat for the Blues on the wing, and Cork persistently fouled the speedy wing forward as he made threatening runs through. Gaughan leveled the scores with a point, and Philip Lydon got the go-ahead score shrtly thereafter. Late in the half, Lydon goaled to put the Blues four to the good, 1-5 to 0-3. 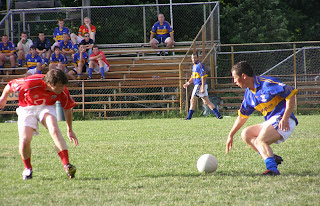 Cork’s goal early in the second half gave them some hope, but the Blues answered in kind and went on the ease to a comfortable victory. After Lydon’s goal, Darren Wallace pointed and Lydon completed his hat trick with 15 minutes to go to put the Blues 10 points to the good. Mike Moynihan pulled two points back for Cork, and Devlin another goal, but Ken Kileen, who came on as a sub, rounded out the win for the Blues with a goal at the death. With the Blues on six points, a playoff berth in the senior championship is still possible.
Blues: D. Hawes, K. Cryan, S. Kelly, S.Ruane, C. O’Grady, N. Ewing, S. Henry, R. Hennessy, G. Henry, Thomas Cryan (0-2), Gary Gaughan (0-2), Darren Wallace (0-2), Phillip Lydon (3-2). Sub; Ken Kileen (1-2). Cork: K. Reid, M. Carolan, S. Caulfield, K. Moriarty, J. Leonard, D. Kearns, A. Creagh, K. Connolly, C. Griffin, D. Flynn, A. Bourke, Niall Devlin (2-1), Mike Moynihan (0-3).
By Rory O'Donnell
Posted by Rory at 11:55 PM