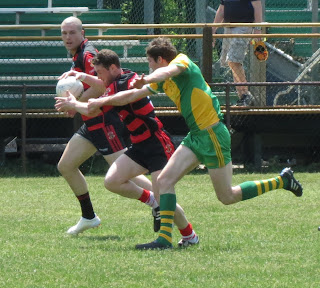 Donegal and Christophers began their championship campaigns under blues skies at the Irish Cultural Centre in Canton on Sunday afternoon.  The teams also met at the opening stage this time last year and are no stranger to each other.  Donegal had the edge that day, and as it turned out, also did one year later.  Christophers started sharp with a point from local youngster, Paudie Kenneally.  Christopher’s also almost had a goal with the ball nearly trickling into the net, but the scare had the effect of waking Donegal out of their slow start.  The northern side began to dominate the game.  Christy Bell and Brian White fired the opening salvos, and were followed with points from Ciaran wiliams and veteran stalwart, Kevin Curran.  A well worked goal from Garbhan Friel followed after a great ball from Brian Donnelly.  White and Donnelly, who made is debut for Donegal, pointed again and shortly afterwards, White scored Donegal’s second goal.  Things were not going well for Christopher’s.  The 2009 champions battled back however, and scores came from Dan Kenneally and Eoin Gorham.  Christopher’s were unlucky not to have a goal as Paudie Ken rally's chance just went wide of the post.  Donegal were in a comfortable half time position, leading by 2-10 to 0-3 for Christopher’s.

Christopher’s opened the second period brightly with a nice scores from Paddy Mainiry and mid fielder Shane Flannagan.  However, once White settled the Donegal nerves with a point from a free that could easily have been a goal, the northern gale began to blow.  Hugh. Devine and Niall McConnell came in for Paul Mc Nulty and Kevin Curran, and scored came from Ciaran Williams and Michael Mc Ginty.  Christophers fought back hard with some great scores from the impressive Eoin Gorham and Shane Flanagan, but the Donegal team under new manager Barney Laverty finished strongly to get their quest for 2012 silverware off to the best possible start.

The reigning Boston champions met Kerry to open their title defence and were defeated in a tight, intense game.  McAnespies got off to a flying start with 2 points in the opening 5 minutes, one coming from Colm McCrory.  Kerry opened their account with a fisted goal from Ian Whelan, who met a cross square ball from Robert O Hanlon.  The goal put some fire into the Kerry furnace and the men from the kingdom got on top, and had the aid of a firm breeze.  Padraig doyle pointed for Kerry after 10 minutes, and just after the mid way point of the opening period, Ian Whelan again pointed.  Kerry had a couple opportunities from frees but failed to convert.  McAnespies suffered a long dry spell, but after 24 minutes pointed.  Rather than settle and impress themselves in the game, McAnespies got hit with a one-two punch just before half time.  Two goals in the last 5 minutes rocked the champions.  The first came from Paddy Tanny and the second from Donncha Fenton.  After McCrory pointed for McAnespies it was Kerry who held the lead at the break, 3-2 to 0-5. 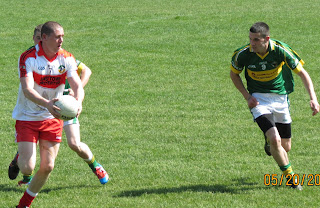 Kerry continued to enjoy the advantage in the second half.  A point from Tanny after 8 minutes was followed by another after 14.  McAnespies then went to work realizing that there was a game to win and it was Kerry who experienced the barren period.  For a time it looked as if the experience of the champions would carry them through.  Gareth O’Neill pointed after 19 minutes and converted a free shortly afterwards, while Fergal Doherty urged his cohorts to lift their game..  With less than 10 minutes to go McAnespies won a well earned penalty.  Colm McCrory being the player fouled and also got up to fire the shot home.

Kerry though, showed some character and fought back, scoring points in the 25th and 30th minutes.  Mike McCarthy pointed a free and Whelan accounted for the other score.  McAnespies were forced to go for goal and almost generated chances on a couple of occasions, but each time the final pass went astray.  With time up McAnespies won a 45 which they dropped into the square, Kerry broke the ball out, and with it Joe Moriarty called time.  First blood to Kerry in what was perhaps a surprise result. 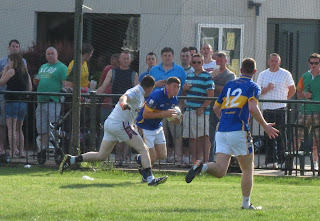 With key forwards Danny Reddin and Gearoid O’Connor out with early season injuries Galway faced a tough task on Sunday and went down to an excellent Shannon Blues side.  Eoghan Kavanagh was the man of the match for Galway, while for the Blues Brian Curran and Shane Kelly led the charge. 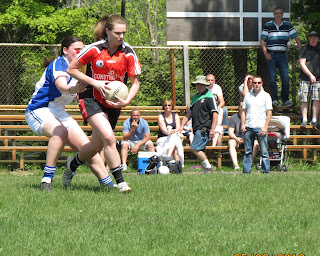 
Thanks to John Cunningham, Dan O'Connor, Sharon O'Brien, and Ciara Burns for contributing to this report, and to Majella McFadden for the photos.
Posted by Rory at 10:44 PM