With the final round of games left in the senior hurling championship, Tipperary are in the familiar position of table toppers, while Tom's last chance is to force a playoff by beating Wexford next week.  Driven by Kieran Morris at corner forward, 2 first half goals propelled Tipp into a half time lead.  Tom's battled to keep in touch, but with about 10 minutes to go a third goal knocked the stuffing out of their challenge.

It was Kieran Morris at corner forward who had an involvement in each goal in the first period.  Eanna Murray netted the first following a 30 yard run from Morris, while Morris got the second himself.  The second goal put the distance between the teams as Tipp led by a point at that stage.  Tom's looked to Mark Deegan and Joe Carroll for inspiration.  Carroll put a fine score over the bar late in the half, while Deegan pointed twice.  David O'Mahoney netted a goal for Tom's after Cormac Joyce-Power played a fine ball over the top.  However, the Tipp defence did a good job mopping up the ball played into the Tom's forward line, and with the points coming from the familiar sources of Murray, Maher, and Morris by the break it was 2-7 to 1-7 lead for Tipp. 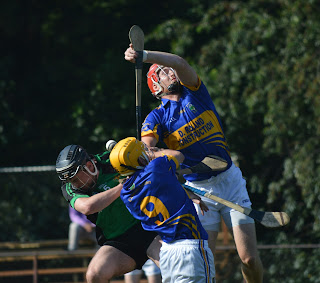 Tom's had reduced the deficit to 2 points early in the second half after Joyce-Power, Deegan, and Joe Carroll pointed.  Shane Howley showed some lovely skill and vision to find Carroll for his score.  Tipp's points came from wing back Geoff Brennan and midfielder Kevin Kelly.  The game remained within four points between the sides until the final 10 minutes.  After Tom's missed a couple of great chances to pull closer, Tipp finished strong and tallied 2-4 to put the game away.  The third goal was a back breaker and somewhat unfortunate from a Tom's standpoint.  Eoin Fleming made a great save from the initial shot, but Morris was there to pick up the pieces after a fluffed clearance attempt, and netted easily.  Substitute Mick Brennan helped himself to a goal and a point after coming on.  With the game gone from them a consolation goal came from Joyce-Power.  So, Tom's needing a win against Wexford to stay in the competition, while a draw next week against will see Tipp straight into the final.