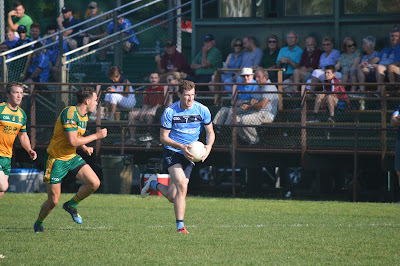 This is the most eagerly awaited final in Boston in recent years.  At the end of it all there are few who would not agree that these have been the two best teams in town, certainly since the second half of the championship.


Donegal have some of the biggest names in the game in the side, and generated much publicity at home and over here by adding Dermot Connolly and Brendan Murphy to an already strong panel of players at the end of June.  Added to that are Donegal’s Michael Carroll, Derry’s Ciaran McFaul and Niall Keenan, Galway’s Liam Silke and Dylan Wall, and Shane Carthy from St. Vincent’s, as well as Armagh prodigy, Oisin O’Neill from the famous Crossmaglen.  Their first real test since was last week in the semi-final where Aidan McAnespies made the Donegal men earn it, and Donegal passed with just about enough to spare.  The game will most likely have served them well in preparation for the Tones.  Donegal also got some nice scores out of the home based Lee Carr, and some great saves at the other end of the field from goalkeeper Hugh Boyle.


Wolfe Tones themselves are laden with some serious top tier talent scattered throughout the field.  Westmeath’s Kevin Maguire and James Dolan, Laois man Eoin Buggie, and Meath trio of James McEntee, Ronan Jones, and Thomas O’Reilly will feature heavily Sunday.  Added to that is Louth’s Paddy Keenan, Derryman Dean Curran, with Dubliners, Aaron Elliott (Ballymun) and Chris Sallier (Thomas Davis).  Mike O’Brien and Jack Lynch have been key players for the Tones, who would appear to have the more balanced side.


A factor not to be lost is that in such a high profile game with some of the best talent the game has to offer, there are home grown players who will likely play a part in the outcome.  Donegal have Ciaran McDevitt and Mark Dunphy who have featured all year, and for the Tones Jack Lynch and Paudie Kenneally are very much an integral part of the team.


How will it all unfold is hard to tell and there are more questions than answers.  Can Donegal stem the Tones attack?  How will the Tones cope with such talents as Dermot Connolly, Brendan Murphy and Oisin O’Neill?  Who will make the wiser moves from the line?  This is certainly one to look forward to.


Prediction:  Donegal to shade it by 3. 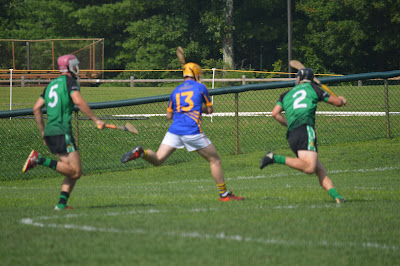 The reigning North American junior hurling champions are the favoured side in Sunday’s senior hurling final.  Tipp have seen some home based players come back into the team with a bang, John Kindregan and Cronan Dempsey have been on form this year.  Dempsey is coming off a wrist injury, so it remains to be seen to what degree he will participate.  Joe Coleman from St. Martin’s in Wexford is the man to watch.  The big center forward can put the ball over from distance, and up front there are Limerick’s Dean Coleman and Russell Quirke, each able to open up a defence with speed and quickness.  Sean Delaney has been doing well in the middle of the field as Tipp have been fairly rampant all season.


Tom’s have earned their place in the final following a semi-final replay victory over Galway in the middle of the week, and already would have had their work cut out to deal with the firepower of Tipp.  Also having to recover from Wednesday night’s exertions will not be in their favor.  Tom’s will be looking for 100% from all quarters to pull off a win.  At corner forward Ali Dooey has been a factor for Tom’s, the speedy man from Dunloy, County Antrim can pop over scores when given a bit of room.  Clare man, Stiofan McMahon, will also be looked to for scores.  Though absent most of the season, Cormac Joyce-Power played in both semi-final games and may also feature in the final.  A big contribution will be needed Dubliner Dean Flood, and the home based Shane Howley, Dylan Costello and Jack Martyn.  Toms’ will have their work cut out and keeping the talented Tipp forwards in check will be key for them. 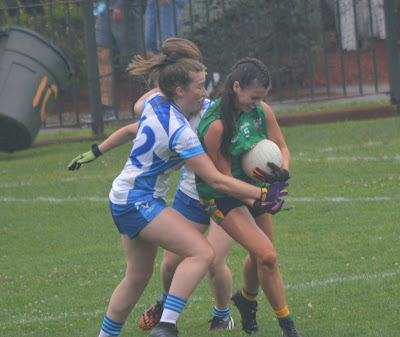 The Ladies Final has a couple of possibilities due to the nature of the competition.  The teams played a best of 5 on a points basis, and Sunday sees game 5 of the series between the teams.  Connacht Ladies are ahead on points, having 2 more points than the Shamrocks.  This means that a Connacht Ladies win, or even a tie at the end of normal time, will see them crowned Boston Northeast Champions by virtue of having most points in the series.  The Shamrocks need to win to draw level in the points tally, which will force extra time to determine the champion.
The season has swung in the Connacht Ladies favour in the second half.  Early on it was the Shamrocks with the upper hand, however the last two games have gone to the westerners and they will be confident going into the final of sealing the deal after 60 minutes.  Corkonian Aoife Heffernan and Tyrone native Maedbh McGleenan in the middle of the field have been key to the efforts of the Connacht Ladies.  Catherine Boyle has been an anchor in the back line, while Aisling Kerr and Jane Ward up front have given the girls in blue and white a real advantage.


The Shamrocks are defending champions and will not be willing to let this go easily.  At the back Cathy McEleaney is still doing the business, and Laura Kiernan is a leader in defence.  Niamh Harney is also a key in the Shamrocks set up, who will have it all to do to turn the tide of this season.  So. Will it be Connacht in 60, or the Shamrocks pushing it to an extra period?  Sunday will tell all.


Defending champions, Cork, face a very good Donegal side who will be eager to reclaim the Pat Callaghan Cup.  Donegal won in 2016 and look well positioned to do so again on Sunday.  Donegal are strong down the middle with Darren Doherty, Darren Grant, and Rocky Ivers playing well.  Talented forwards Eoghan McGettigan, Ashley Carr, Ciaran McDevitt, and the wily veteran of many campaigns, Christy McLaughlin will have the Cork backs on their toes for the hour.


Cork have their share of scoring talent in Adam Ryan and Adam Kenny and the more Cork can keep the ball at that end of the field the better.  Keeper Mark Farrelly pulled of some great saves this season and is likely to be called on Sunday on more than one occasion.  The back line will need to weather the pressure and keep the Donegal forwards in check as much as possible and keep it tight.  The reigning champions will not make it easy for Donegal.


There is very little between the top 2 junior C hurling teams.  During the season each side took a win, Worcester by4 and later in the year New Hampshire by 3.  This game is likely to be a hotly contested affair for top dog in New England.  These clubs are made up of American players who have taken up the hurl and honed their own skills over the years.  There are plenty of talented hurlers on each side and with nothing between the teams, this game may be one of the finals of the weekend. 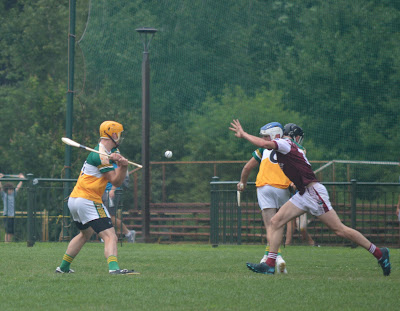 Galway and Offaly have a chance to take some silverware home in the junior A hurling final.  Offaly beat out Wexford to reach the final, while Galway enter by virtue of finishing 3rd of the five teams.  Offaly have hurled well all season.  Emmet Moran, Jimmy Rigney, and Jack Dunphy have been key for the Faithful men this season, while for Galway Aidan Helebert, Jack Lyons and Adam Kenny have been to the forefront.
Posted by Rory at 9:56 PM