The Junior C Hurling final came as advertised, with hardly a puck of a ball between the teams.  There was a healthy contingent of supporters who came to the Irish Cultural Center, Canton Mass. from Worcester and Concord NH to cheer on their teams.  There was some excellent hurling and great scores – and saves.  It was a testament to how far these clubs have come since forming 10 short years ago.  It could have gone to either team, and in the end it was the New Hampshire side who came out winners.


The first half was as tight as can be with just a point separating the teams at the break.  The Wolves had the better of things in the early going, but missed several opportunities to point.  A goal from Pat Naughton maintained the Granite State boys advantage for the half.  After Mikhael Gregoire pointed, a hopeful long, high ball from Naughton sailed into the back of the net.  Mike Durfee followed with another point and the Wolves had a three point lead.  Worcester then came into the game.


The men from western Mass. outscored their opponents 5 points to 3 in the approach to half time.  Connor Green put some excellent scores over, one from a very tight angle after Worcester had almost netted.   Tom Lind also pointed from distance as the Worcester side had a slight edge and were hurling well.  Steve Desjarlais was very busy in goal for the Wolves and held his nerve well under many high balls, and delivered several lengthy clearances.  At corner back Alec Foley also did well to keep Worcester at bay and cope with the pressure. 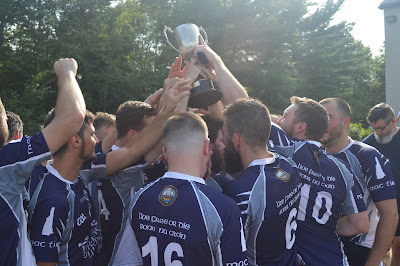 Worcester got off to a great restart with a superb goal from Greene.  PJ Heffernan found Greene with a high cross field ball and Greene fetched and finished expertly into the far corner.  The goal put Worcester up a point, but the Wolves came right back.  Pat Naughton leveled the scores with a point, and then rifled the ball into the corner with a pull off the ground shortly afterwards.  Naughton at center forward was a force for the Wolves in the second half.  The teams traded scores with Worcester needing to catch up as the game entered the final quarter.


Zack Jacobs who entered as a sub for Worcester made an impact, pointing after entering play and driving his side forward, along with Dave Crowley who tried to find a way through the Wolves defence.  The Wolves held a 4 point lead, which seems huge in such a tight game, but Seamus O’Shaughnessy netted for Worcester and just like that it was a point in it with the clock winding down.  Jason Burpee got the insurance point after cutting in from the corner, and his goalbound shot was excellently saved by Mike Dufault and went over for a point.  Burpee had to leave the field following a heavy challenge after the shot for which Seamus O’Shaughnessy was sent off.


The Wolves held on to win It and in the end probably just about deserved to.  A great victory for the New Hampshire team, and on the Philly next weekend!