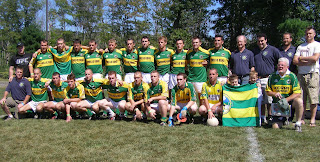 Both Kerry and Galway participated in the Intermediate Football, and both teams made the final on Sunday. Kerry defeated Ulster of San Francisco in the semi-final, and Galway got a bye straight into the final. Kerry avenged their disappointment in the Boston final with a convincing win. Mickey Joe Hynes put in a fantastic goalkeeping performance for Galway, and the margin of Kerry’s victory would have been much more had it not been for Hynes. Hynes pulled off at least 5 point blank saves to keep his side in the hunt for much of the game.

Kerry opened the scoring with a Jer Molloy point. Kerry had the better of the early exchanges and registered a number of wides before Hynes pulled off his first amazing save of the game from Mark O’Sullivan. With O’ Sullivan bearing down on goal, Hynes kept his nerve and blocked the point blank shot. Galway eventually settled down and registered some scores. Tommy Walsh and Peter Nolan got the tribesmen off the mark, but Kerry responded with scores from Richard O’Sullivan, Johnny Moroney, and Mark O’Sullivan. At the break Kerry led by five points to three. 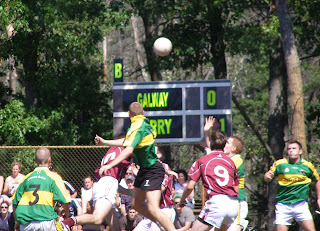 Kerry took over in the second half and registered ten scores to three from Galway. Mark Evans and Mark O’Sullivan combined to great effect and between them accounted for five of Kerry’s scores. Hynes pulled off another of his magnificent saves early in the half, and Ger Barry pointed from the rebound. Barry followed with a point from play, and then O’Sullivan found Evans for another Kerry score. Evans pointed again mid way through the half and Kerry were in the driver’s seat, leading by six points. John Joe O’Neill and Mattie McKenna did well for Galway in trying to turn the tide, but to no avail. Evans and O’Sullivan each pointed again before Richard O’Sullivan found his namesake, Mark, who finally put the ball past Hynes for a Kerry goal. Conor Hurley capped the scoring with a point, and Kerry made amends for last week with a North American championship.