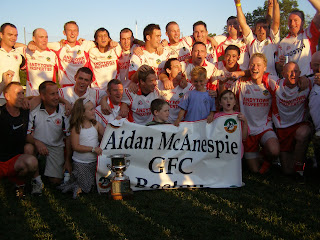 McAnespies won their second North American Championship on the 20th anniversary of the murder of Aidan McAnespie at the Aughnacloy checkpoint in county Tyrone. Their first North American Championship came in 1998, on Aidan’s 10 anniversary. Kevin Barry’s of Philadelphia provided the semi final opposition, and the home side came through a dour enough encounter with a five point win. Kevin Barrys proved to be a tough opponent to break down, and in the second half made a run at McAnespies, scoring five points in a row to come within a point. Steven McGettigan then made the breakthrough and netted to put McAnespies in a comfortable lead. Declan Lally followed with a fine point to secure progression to the next stage.

In the final McAnespies met Sean Treacy’s from San Francisco, who defeated Chicago Parnells in extra time in their semi-final. McAnespies played some good, error free, football in the final and looked comfortable throughout. In spite of conceding a goal late in the first half that brought the visitors level, McAnespies maintained their composure and continued to focus and work hard, and ran out convincing winners in the end.

McAnespies looked comfortable in the first half, and went in at the break with a five point lead. Within 10-15 minutes of the throw-in it looked apparent that the South Boston side had the aces in its deck. The McAnespies back line did a lot of mopping up as Sean Treacy’s lost their way when entering the attacking zone. Christy Lynch had an excellent first half at corner back, as did Danny McBride in the middle of the field. The Strabane man supported the back line well and played the part of link man when McAnespies played the ball out of defence. McAnespies made good use of their posession. The local side went into a three-point lead in the early going, with Darren Ryan and Colm McCrory scoring the three points between them.

Treacys got off the mark after 13 minutes with a Mike McCauley point. There were a couple of lengthy stoppages as a result of some heavy challenges, and once things got going again in earnest, Treacys got themselves into the game. After Declan Lally added another point for McAnespies, Gene Griffin and McCauley again pointed for Treacy’s. The San Francisco side drew level after 26 minutes when Mark Gallagher goaled. It came somewhat against the run of play, and McAnespies got the goal back before half time. McAnespies were the beneficiaries of a somewhat curious decision by the referee who blew for a free out for a pick up after Declan Traynor came off his line and bundled over an attacking player – a let off for the home side. Steven McGettigan and Ryan each pointed, and the Alan Feeney goaled in injury time after being fed by McCrory. McAnespies led by five at half time.

Playing with the breeze and away from the sun in the second half, the Boston side extended their lead to eight points as what appeared to be inevitable came to fruition. McCrory pointed twice from play and once from a free. Shane Glennon, who had entered as a sub in the first half, stemmed the bleeding with a well taken point for the visitors and looked like the San Francisco side’s best attacking option. McCrory’s speed continued to cause problems for the visiting back line in the second half, and the Monaghan man added another point for McAnespies. Danny McBride and Lally added two more points and with 10 minutes left the locals led by 10 points. Treacy’s went looking for a goal - or two - that would be required to pull off a late comeback, and twice Glennon could have netted but shot over the bar. Colm McCrory underlined a great overall performance with a goal at the death. McAnespies win their second North American championship. 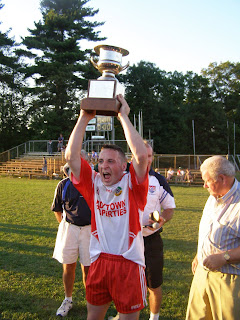