Wexford just made it over the line ahead of Tipperary in a photo finish in the senior hurling final. It was a game that had the punters going from muttering about being too one sided at half time, to talking about how it was the best game of hurling every seen by the time the final whistle sounded. The Slaneysiders won the game with literally the last ball stuck in the Boston hurling championships. Wexford looked like they would walk it after the first 30 minutes, but Tipperary pulled themselves back into it and brought the game into extra time. It was back and forth for the 20 minutes of the extra period with the lead changing hands 5 times, the final time in Wexford’s favour with a Mark Walsh point from play as there was not even time left for the puckout.

In spite of losing Shane Hennessey for a period early in the first half, Wexford put their stamp on the game. By the end of the first period the Wexfordmen held a comfortable seven point lead. Mark Walsh took the free taking duties and put three over the bar. Hennessey had accounted for three points before exiting the fray. Wexford got a goal courtesy of Joe Clarke, who Peter Ryan fed and Clarke smashed the ball home. Walsh rounded off the scoring with a free before half time. Tipperary did not manage to find room to shoot. Dominc McGill was on form at center back and Wexford won most of the possession from puck outs. Frances Devanney, Thomas Waters, and Alan McCrabbe each pointed for Tipp, who trailed by seven points going into the break. 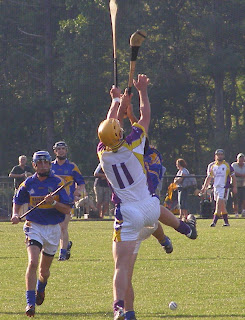 Tipperary took the field for the second half with a changed lineup, and notably Owen McCormack came in as a substitute. Wexford got the first score of the second half, another Mark Walsh free, but Tipp got some hope from a goal right from the puckout. After Dominic McGill put one over for Wexford, Tipperary scored 6 points in a row to narrow the deficit to a single point. Then came another penalty. Alan McCrabbe took it and this time shot low and put Tipp a goal to the good. Wexford answered with three points on the trot to level the scores, and with the game on the line Tipp missed two great chances to take the lead, the shots drifting wide. Mark Walsh then put Wexford ahead on the stroke of 30 minutes, but Tipp answered immediately with a point from Gareth Sinnott to send the game into extra time.

Tipp took the lead in extra time with a point from Owen McCormack, but lost it, won it back and then lost it again for the last time. There were wonderful catching, hard hitting, and great scores in a game that had the spectators glued to their seats. It looked like Austin Murphy’s point would win it but Frances Devanney equaled it with as good a score. With 30 minutes up Mark Walsh had the final shot of the game and made it over the bar for Wexford to win their third hurling championship in a row. It was a game worthy of a championship final, and fittingly the final game of the Boston championships.

Great to be able to read reports of my old team, Galway. up the west!