The Prize for Armagh-Notre Dame would be a date with Brighton rivals Galway in an all Brighton intermediate final. For much of the game it looked as if it might come to pass, but with the sides level going into the final quarter of the game Kerry got the crucial score to break the deadlock, a David Waters goal with 10 minutes to go proved to be the difference between the teams in the end. 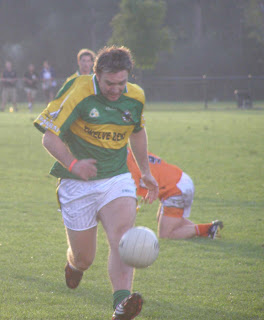 Armagh-Notre Dame got off to a great start. The Brighton side had two goals in the back of the net within the first 10 minutes. Brian Downes scored the first, rounding his man and finishing into the virtually empty net. The second was a excellently well placed shot from Frank Meehan with the outside of his right boot into the far corner. With the second goal Armagh-ND were five points ahead. Bernard O’Connor and Mark O’Sullivan each pointed for Kerry, while Brendan Quinn scored a minor for the northerners. At that early stage Kerry looked like they were in danger of suffering a heavy loss, but the Kingdom got their act together to pull within a point by half time.

It was back lines on top for much of the half as neither forward line managed to finish off attacking moves, whether it was coughing up the ball or shooting wide, the scoreboard did not change for a long period. Kerry, however, finished the half with four points on the trot, Martin Sweeney put two nice points over the bar from wing forward, while Bernard O’Connor and Richard O’Sullivan also pointed for Kerry. O’Sullivan directed affairs from the middle of the field for Kerry, and was probably the best player on display for the first 30. At the half it was 2-1 to 0-6 in favour of the northern side. 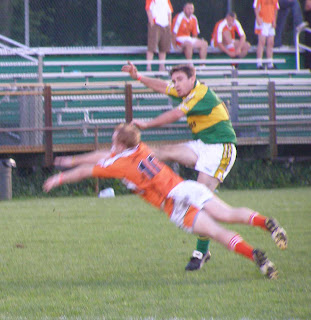 The second half was even stevens until Kerry goaled with 10 minutes to go. The sides traded points for the first 20 minutes. O’Connor, Mark O’Sullivan, and Mark Evans pointed for Kerry, while McStravog, Paudie Mulpeters, and Brendan Quinn did the same for the Brighton side. Kerry then put some daylight between the teams with a David Waters goal, Waters had been relatively quiet up to that point, but came up trumps when Kerry needed it most. Kerry added another point through Danny Fox to extend the lead to three, but McStravog and Dominic McGill got Armagh-Notre Dame back within two points and extra time looked on the cards, but not as far as Kerry were concerned. Danny Fox put Kerry two to the good, finishing off a great move, and Mike Godley made it three between the sides with the last kick of the game. It will be a Galway Kerry final next weekend.