Tipperary put on a great team display and showed great sense of purpose to win the junior hurling title on Saturday, and in doing so took their second Boston junior title in a row. After 15 minutes Tipp’s focus along with their desire showed through as they worked themselves into an unassailable lead. Brendan McLaughlin was on form and the Carrickmore man scored two goals at key junctures of the game to help put the game beyond Wexford.

Wexford held a slight edge after the opening quarter, but then Tipperary gradually took control of the game and scored a goal and five points without reply. McLauglin feasted on an abundance of possession as plenty of ball found its way into his corner, and scored a fine goal with 20 minutes played. His partner in the full forward line, Paul Ryan, had goaled earlier in the game, and Tipperary will have been happy with first half return in that department. At the opposite end of the field, dual corner back, Christy Lynch executed his duties well as Wexford found the going tough in the final third of the field. At one point Mark Daly made a fine save from Graeme Molloy, but soon afterwards, Shane Kehoe scored Wexford’s goal. It was a fortunate one that looked to be heading over the bar from long range, but dropped short and with the sun in the keepers eyes, into the back of the net. Wexford’s points came from Stephen Delaney, while McLaughlin, Daithi Waters, and Fergal McDonnell pointed for Tipp. At the half Tipp led by a goal and four points. 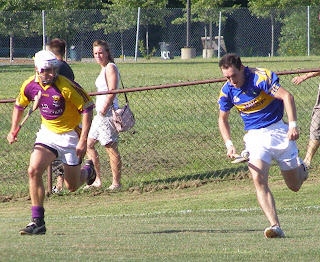 Christy Lynch carries the ball out of defence for Tipp as Graeme Molloy shadows him.
Tipp drove home their advantage in the second half. Scoring a goal and five points to two points for Wexford, Tipperary wrapped up the game. After extended their lead with points from Kevin McGreavey and Paul Ryan, McLauglin showed his predatory instincts and Tyrone man fired home a rebound, which more or less sealed Wexford’s fate. With 10 minutes to go Wexford generated some goal chances, but Mark Daly saved well on a number of occasions. Wexford battled on and managed a goal from Tom Drennan and Graeme Molloy points, but Tipp were too far ahead for the Wexfordmen to have a serious chance of catching them. A deserved win for Tipp, who go on to the North American Finals as Boston champions.