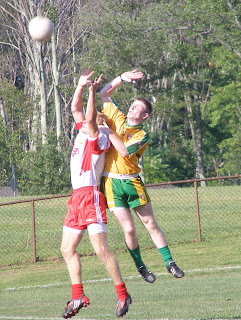 McAnespies took their fourth championship in a row with a comprehensive victory over Donegal, and truth be told, the margin of victory could have higher. It seems a far cry from the Buffalo Bills days of the South Boston side when victory in the big one always escaped them. An early first half goal, followed by a second mid way through the half put the Macs in the drivers seat, while Donegal did nothing to help their cause. When enjoying a long spell of dominance in possession, and a chance to regain their footing and recover, Donegal kicked wide after wide. The usually reliable Kevin Curran and Dualtach Molloy missed some good chances, and Donegal’s hopes drifted away as the wides mounted.

McAnespies got off to a dream start, and never looked in danger of giving up their title from the word go. Conor McGourty goaled in the third minute, and the score was quickly followed with points from Steven McGettigan and Colm McCrory (free). McAnespies had a couple of chances to blow the game wide open before Doengal got a score. McGettigan found McGourty with a great pass and McGourty’s shot hit the post. Donegal introduced Ciaran Bonner to the fray in an effort to turn things around, and Bonner did bring some mettle to Donegal’s efforts. Dualtach Molloy finally pointed from a free after 10 minutes, but rather than settle down the side, Donegal proceeded to kick 5 wides. With Donegal enjoying a good spell in terms of possession, McAnespies netted a second time. Danny McBride was pulled down in the box as he bore down on goal, and Christy Lynch placed his shot well into the bottom corner. The wides mounted for Donegal as neither Dualtach Molloy nor Kevin Curran could find direction. Eventually Molloy pointed from play, and David Donegan put one over for McAnespies before the half time whistle. McAnespies by seven at the half; 2-3 to 0-2. 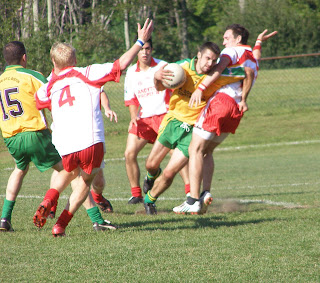 McAnespies defence gave no room to Donegal all afternoon.
Things did not improve for Donegal after the restart. Within 3 minutes McAnespies had themselves another penalty and again, Lynch did not err in his shot. McAnespies now 10 points ahead. Frustation crept in for Donegal, Bonner had his name taken shortly afterwards. The futility of Donegal’s efforts were underlined by the removal of what had been the mainstays of their attack all season, Dualtach Molloy and Eamon Murphy. Ironically enough, their replacements, Michael McGinty and Ronan Diver each pointed shortly after their introduction. McAnespies regained control of affairs again, Alan Feeney, who had an outstanding game, and Christy Lynch who was on top of his man all day, each pointed from their back line. David Donegan also contributed on the scoreboard with a goal after 20 minutes and Donegal’s chances of winning evaporated completely. Plenty of satisfaction in the McAnespies camp having been beaten in each of the junior football finals, taking the big one more than makes up for it.