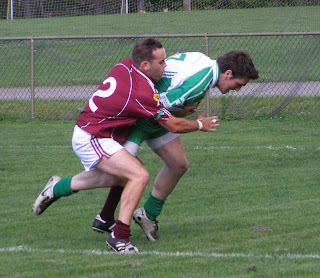 James Carlin was kept on a short leash all day.
The weather co-operated and Saturday afternoon was ideal for football with a light breeze and warm temperatures. The field was a little greasy following the mid-week rains, and on occasion the players lost their footing. After a fairly evenly contested first half, Galway came to grips with the game and put in a great second half performance, playing some good team football, to leave the Gaels looking for answers. The Gaels got off to the better start and led by four points at one stage, but Galway came to grips towards the end of the half, and went on to score the last six points of the game to underline their superiority on the day.

The first half was a scrappy enough affair. The Gaels enjoyed some good spells of football, but having won frees in very good positions, missed at least four great chances, two early in the half and two late in the half. In between the Gaels back line worked very hard to deny the Galway forwards the room to score. Pat McNicholas in particular stood out, and Brendan McLaughlin and Coleman Conroy also did well. At one point the Gaels led by five points to one. James Carlin put two over the bar from play and two from frees, while Frank Niblock added another. Carlin and his marker, Shane Melia, were enjoying a good tussle, and it seemed that Carlin held a slight advantage in battles won. Galway got into the game mid-way though the half, but missed several chances before finding their shooting boots. Three points on the trot before half time reduced the deficit to a single point. Graham Molloy, Tom Walsh, and Matthew McKenna each pointed to reduce the Gaels advantage to a solitary point by half time. 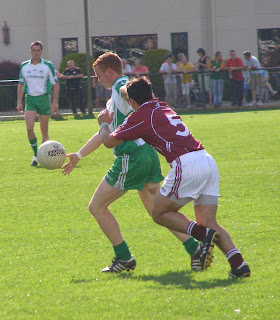 Frank Niblock tries a shot while Joe Clarke moves in to block.
The second half was a turn around for Galway. The tribesmen lifted their game while the Gaels forward line sputtered. Galway outscored the Gaels by six points to two in the first 20 minutes of the half. Galway worked hard throughout the field to get ahead and stay there. The Gaels introduced a couple of subs into the forward line, but Galway’s back line still kept one step ahead of their opponents. The Gaels over relied on Carlin and Niblick and there seemed to be a sense of urgency lacking, while the Galway worked the ball well right through the field with several players touching it before the final shot. Eoghan McCormack put four over the bar for Galway, while Graham Molloy, Peter Nolan, and Donal Redmond also got in on the act. The Gaels could have kept the game closer, but trailing by three with 10 minutes to go felt the need to shoot for goal when points might have been the better option to rein in their opponents. Galway continued to motor, and made the last stages of the game a formality.