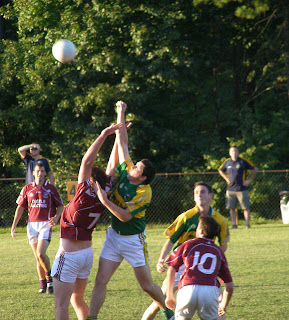 Kerry looked like they had this game in the bag after the first 20 minutes. The Kingdom led by eight points to one, and Galway looked like they were just not interested. Whatever happened in Galway minds, or Kerry minds for that matter, the game was turned on it’s head for the final 40 minutes. Galway outscored Kerry by 12 points to 2 over that period. Perhaps Kerry thought the game was won and rested on their laurels, perhaps Galway realized there was a championship to win, and started playing some football.

Richard O’Sullivan, Bernard O’Connor, and Mark O’Sullivan were lording it and having their way with their opposite numbers in the early going and it looked like there was only one team interested in winning the game. Johnny Moroney stole forward from center back to point, and O’Sullivan, Ger Molloy and O’Connor each scored for Kerry in the early going. As the points accumulated in the Kerry column, Galway supporters were beginning to wonder if their team were interested. The tribesmen answered that question and pulled themselves back into it. Graeme Molloy led the charge with three points, one from a turnover that highlighted the change in momentum from Kerry to Galway. After Galway had made it three points to eight, Ger Molloy was coming out of defence for Kerry in what looked like another move that would end in a Kerry score, only to cough up the ball to his namesake, who soloed up the field and made it a four point deficit instead of Kerry extending their lead to six. Galway added points from Joe Clarke, Molloy, and Tom Walsh before half time and Kerry’s lead was down to one point, and the momentum lay with Galway. 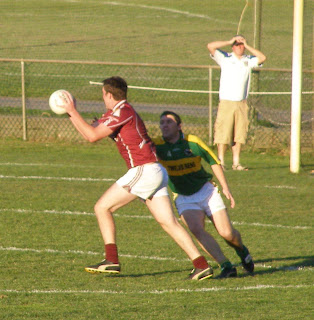 Galway took over in the second half, and really should have put the game away in the first 20 minutes. Molloy, Brian Mullin, Peter Nolan and Tom Walsh played a big part in Galway’s dominance during this period, but there were at least four if not five shots at goal that on any other day would have gone over, but Galway missed them all. Galway did take the lead on a point from Peter Nolan, but by that stage should have been four or five ahead. Kerry were badly struggling and seldom attacked the Galway goal. It began to look as if Galway regret all those misses. Brian Mullin extended the lead to two, before Martin Sweeney pulled a point back for Kerry with five minutes to go. Kerry must have been wondering how they were still in the game and had a chance to win it. Mark O’Sullivan found himself through with room to shoot, and his shot came back off the crossbar to Ger Molloy whose shot went wide.

Galway rallied to put two more over the bar through substitute Richie Kehoe, and extended the lead to three points. The tribesman could have buried the game when Kehoe found Matt McKenna with a lovely pass and McKenna blazed wide when a sure goal was there. Less than a minute later Kerry had the chance to equalize, but Sweeney’s shot trundled inches wide. Kerry laid siege for the last minute to try and find the equalizing goal, but Galway held out. Peter Ryan got under a couple of balls to clear, and there were what looked like 22 players inside the Galway 21 yard line. Galway held out and in doing so won a second intermediate championship in three years.
Kerry: D.Diggins, D. Forde, S. Moriarty, M. Godley, Johnny Moroney (0-1), G. Barry, Richard O’Sullivan (0-2), David Waters (0-2), Ger Molloy (0-1), Bernard O’Connor (0-2), P. Devane, Mark O’Sullivan (0-1), Martin Sweeney (0-1). Galway: P. Ryan, S. Melia, M. Rafter, JJ O’Neill, Joe Clarke (0-1), S. Gallagher, B. Mullin (0-1), Graeme Molloy (0-3), Matt McKenna (0-1), Tom Walsh (0-2), Peter Nolan (0-1), D. Redmond, Eoghan McCormack (0-2). Sub: Richie Kehoe (0-2).
Posted by Rory at 10:25 PM