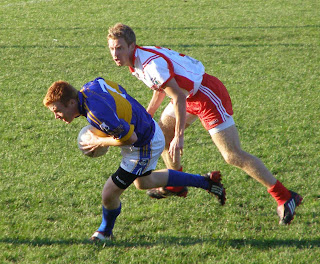 Gary Gaughan tries to put some distance between himself and Graham Norton.
Aiden McAnespies 2-10 Shannon Blues 1-10

McAnespies won a place in the senior football final where they will face Donegal after a hard fought win over the Shannon Blues. Twice McAnespies goaled, blows that would have knocked the stuffing out of most teams, but the Blues fought back and came within a goal of knocking off the team that finished top of the table. The game was physical and tough, and McAnespies played it tight in the back line and found the room at the right times to put themselves in a winning position.

McAnespies held the edge at the end of the first half. A Declan Lally goal after 20 minutes put some daylight between the sides. With McAnespies leading by a point, Lally made a burst through the Blues defence and slid the ball under the advancing Declan Hawes. Up to that point it was fairly even, with McAnespies perhaps holding a slight edge in terms of the balance of play. Phillip Lydon had put three frees over the bar for the Blues and Thomas Cryan one. For McAnespies the scoring was spread out a little more; CJ McGourty, Lally, Colm McCrory, and Christy Lynch (all the way from corner back), each pointed. The Blues tried to get the ball to Gary Gaughan at every opportunity, and when receiving the ball on the run, Gaughan looked dangerous, but the McAnespies back line swallowed up the Sligoman on several occasions. McAnespies finished the half the stronger side. Conor Galligan and McCrory pointed, while Lydon converted a free that was conceded by McAnespies by virtue of a badly taken free in their own defence. At the half McAnespies led by five. 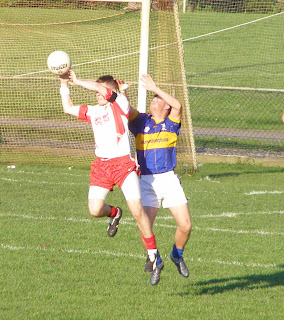 CJ McGourty rises to meet an incoming pass with the sun in his eyes.

The Blues began the second half well and made a run at McAnespies. After McCrory pointed for McAnespies, the Blues put three unanswered points over the bar to bring it to within a score, but McAnespies struck with a second goal. McGourty fed the inrushing Lally who sidefooted into the empty net. This followed a Lally point, and the lead was seven. The Blues had something left in the tank to mount a late comeback. Philip Lydon pointed from a free and as the Blues carried the game to McAnespies they won a penalty. Ken Kileen, was introduced to the fray and the experienced Sligoman was bundled over in the penalty area. Lydon kept his cool and made no mistake with the shot. Another point was added by Neil Ewing with less than a minute left, but the Blues could not make it all the way back as McAnespies held out in the waning seconds to see themselves through to yet another Boston final.