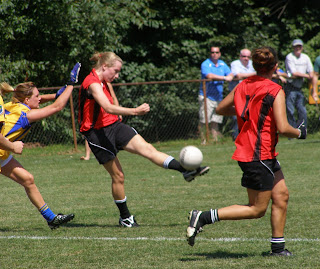 Roscommon pulled the rug from under Tir na nOg at the very last minute with a late goal to steal the Ladies senior football championship. With Tir na nOg leading by two points everything changed as Roscommon scored two minutes into injury time to claim the Ladies Junior Title.

Tir na nOg enjoyed a healthier dose of possession than their opponents in the first half and held a four point lead at the break. The forward line displayed some great passing and registered some fine scores. A goal from Lisa McAleer mid way though the half put Tir na nOg in the drivers seat. With Roscommon leading by three points to two, McAleer put an excellently placed shot inside the foot of the far post to put Tir na nOg ahead. Tir na nOg put the Roscommon back line under pressure and registered three more points before half time through Grainne McClean and McAleer. Karen Maloney got one back for Roscommon before the half time whistle to make it a Tir na nOg four point lead at the break. The Tir na nOg back line shone in the early going as Roscommon endeavored to turn the tables. Winning high balls, blocking kicks, and competing well, Tir na nOg frustrated Roscommon’s forwards. There were a couple of stoppages for heavy challenges that required the intervention of the physio as neither side was willing to give an inch. Colleen Barrett put the Brighton side five to the good, and Claffey cancelled her point. After 17 minutes of play in the second half the difference between the sides was still four points until Karen Maloney put a fine free kick over the bar from 45 yards for Roscommon.

Maloney followed with a great point from play to reduce the deficit to two points with 10 minutes to go. It was Roscommon’s turn to show some steel at the back, Laura Burns made some timely interventions. Maloney further reduced the gap to a point with a free with just one minute to go. Right after Grainne McClean put Tir na nOg two points to the good with a free Roscommon delivered a hammer blow. Roscommon swept up the field and full forward Fiona Claffey rounded her marker to shoot into the back of the net. Tir na nOg had one final chance to equalize but Maria Keane’s long range free drifted wide of the far post. When the final whistle blew Tir na nOg could hardly believe what had transpired, while Roscommon celebrated.