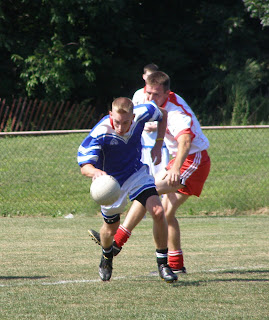 It has been a long time coming, but for the New England Celtics the wait was worth it. After eight years and 4 finals, the Celtics won their first Boston Championship. Youth was a factor as the Celtics ability to keep up the tempo over 60 minutes proves crucial to the outcome. The Celtics extended their lead to double digits early in the second half,and threatened to run away with it. With 10 minutes to go McAnespies caused the local born players some anxious moments as they put a goal and three points up to a solitary point for the Celtics, but the Celtics hung on until the final whistle and received their just reward after a long wait.

The first half featured 5 goals, 2 for McAnespies and three for the Celtics. Both sides had periods where they played good football. When it seemed that the Celtics were about to pull away, McAnespies reined them back in. With the sides sitting on a point each, the Celtics goaled first with a Liam Fleming penalty. Will Fleming was fouled in the area and first cousin Liam converted the kick. Niall Duffy pulled a goal back for McAnespies but the Celtics goaled again through Paul Bannon. Bannon picked up a breaking ball and fired home with only the keeper to beat. The Celtics were looking good and though it was early in the game, seemed to have control of affairs. McAnepies, however, answered with another goal. Paddy Stones shot from close range and now it was McAnespies leading by a point. The Celtics came back with a goal, their third, and two points to finish the half. Two Liam Fleming dead ball kicks from long range sailed over the bar, and then Will Fleming goaled on the stroke of half time to give the Celtics a four point advantage at the break.

The Celtics got the all important scored after the restart with two Fleming frees and after 10 minutes a Pearse Lombard goal put the all American side nine points ahead. The Celtics won possession from almost all kickouts. Danny Kenneally Liam Fleming, and Jerry Kenneally led the Celtics charge, while Brendan Kelly and Pearse Lombard were instrumental in the forward line. The Celtics then kicked several wides, which almost came back to bite them as McAnespies made a late run. Trailing by 10 points McAnespies narrowed the deficit to 5 with five minutes still to go, and one began to wonder whether the Celtics had it to hang on. Paul Meegan goaled and points came from Owen McCusker, Paddy Stones and Declan Slevin. Slevin’s shot was for goal and shaved the crossbar on the way over; th 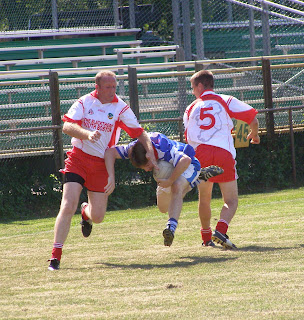