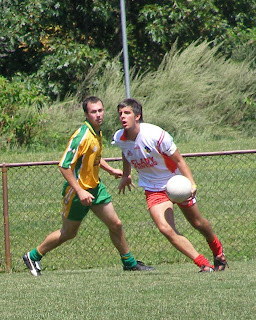 Donegal captured the junior A football championship in a very exciting, bruising, and tense encounter with Aiden McAnespies. Donegal played some great football, and forwards Paul Boyce and Aiden O’Hagen proved huge factors in their victory. Donegal led from the start but McAnespies made it close at the end, almost pulling off a late victory as Gary Hennessey’s shot flew over rather than under in bar during injury time.

Donegal got off to a great start in the first meeting of the day between the two clubs, and got into a five points to two lead after 15 minutes. McAnespies then had the better of things for the remainder of the first half, but missed several good chances to score. In contrast, Donegal’s only foray forward resulted in a Paul Boyce point that lifted the siege. McAnespies’ Shane Lynn made it six points to three at the half with the game very much open.

Possession was keenly contested around the middle of the field, and each side fought hard to gain an advantage. Jonathan Byrne and Simon McDonagh for Donegal and Thomas Tuite and Shane Lynn for McAnespies contested everything as if their lives depended on it. McAnespies made inroads early in the half and reduced the deficit to a point with scores from Eugene McKenna and Tuite. However, Donegal came back with a score from a Paul Boyce free. Boyce then won a penalty that was taken by former Tyrone minor, Aiden O’Hagen. O’Hagen’s well directed shot found the back of the net and Donegal were five points to the good. McAnespies made a huge effort to cut into the lead. Barry Brogan ran from corner back to point, and Shane Lynn, McKenna and Nigel Regan each pointed to make it a two point game with less then 3 minutes left. 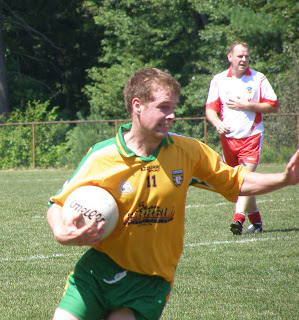 Donegal's Paul Boyce on the attack.
Ricky Rush pointed to put Donegal three to the good again, but Gary Hennessey rushed through from midfield immediately from the ensuing kickout and his shot from the 21-yard line flew over the bar – a goal would have tied it. McAnespies put the pressure on Donegal in the final minutes in an effort to get the goal that would win the game, but Donegal held out and took the first of the games between the teams.

Think you'll find you are mistaken there Rory as it was the Ulster club of san francisco that won the Junior A championship defeating the YI's of philly!!