Galway and Wexford played a tremendously exciting hurling semi-final. Galway would have been slight favourites going on recent form, but it was Wexford who produced the better hurling and few would argue that they did not deserve to advance to the final. Wexford looked to have the game in the bag coming to the end of normal time, only for Galway to strike at the death with a goal and a point to force extra time. Wexford did not let it slip during extra time. The Slaneysiders kept to the formula that had put them in a winning position during the game and re-established a lead, and this time held on to it until the final whistle. 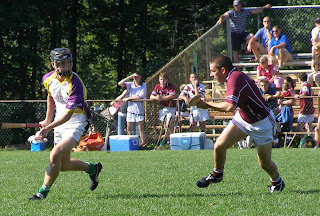 The first half was evenly contested for the most part, each side enjoyed good periods of hurling. Towards the end Wexford began to pull away only to be hauled back in by a Galway goal late in the half. Galway could have gone in at half time ahead. Galway won a penalty after James Kinsella was fouled in the box, but taking a position on the goal line, Dominic McGill saved the shot just before the half time whistle blew. Fintan O’Leary had opened the scoring for Galway with a point, and Shane Hennessey equalized for Wexford. O’Leary again put Galway one to the good, and Mark Walsh answered twice for Wexford. Wexford looked to be gaining an upper hand when Galway struck with a goal from Paul Barron following a good move. Wexford put four points over to one for Galway to finish the half on top, and led by eight points to a goal and four. 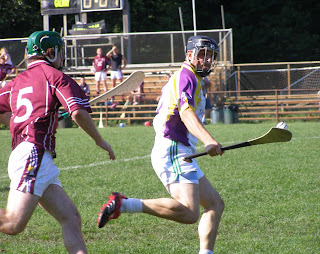 Shane Hennessy put in a fine performance for Wexford as they overcame Galway in Sunday's hurling semi-final.


Galway quickly turned it around with three points on the trot, but in the process were guilty of several bad wides which proved to be costly when all was said and done. Wexford, however, started playing the way they finished the first half. The half back line of Joe Clarke, Paddy Breen, and Dominic McGill put their stamp on the game, and Austin Murphy in the middle of the field helped Wexford impose themselves on the game. Wexford put six points over the bar without reply as Galway struggled to keep pace. Shane Hennessy, Austin Murphy, and Christy O’Connor led the rally and Galway’s goose looked to be well and truly cooked. Galway made one last gasp effort and having won a 21-yard - free, reduced the deficit to a point with a goal. Fintan O’Leary put a point over the bar to level the scores and force extra time. A reprieve for Galway to be sure.

Galway could have got off to a great start to the extra period having won a second penalty. Wexford goalkeeper, Edmund Sprune, was the penalty killer this time, pulling off a great save from Eoin Foley’s shot – the Galway number four will surely like to have had one of those penalties back. Galway took first blood in extra time with a Fintan O’Leary point, but Wexford hit back with four; two Shane Hennessy frees and one each from play from Austin Murphy and Peter Ryan to lead by three at the turnaround. Wexford added a score from Hennessy and the game began to slip away from Galway. James Kinsella was sent off for a second infraction, and the ensuing Hennessy free put Wexford five points to the good. Galway went in search for a goal again, but this time it did not materialize as Wexford ensured there would not be a repeat finish in extra time. Wexford now go on to meet Tipp in the final in search of three Boston championships in a row.