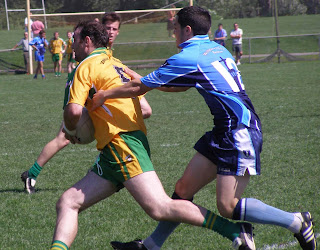 Wolfe Tones 0-6 Donegal 1-15
Keith Cunningham comes out with the ball for Donegal as Marty Farrell challenges.

Donegal advanced to the senior football final in impressive fashion with a resounding win over the Wolfe Tones. Donegal totally outclassed their opponents, who this scribe favoured, and in the end ran out easy winners. Donegal saw the return of Dualtach Molloy from injury, and Ciaran Bonner made a short reappearance, but had to leave the field due to a recurrence of his injury. From the middle of the first half Donegal took control of the game and the Tones could not find their way back into it and surely will be thinking that they could have left more on the field by the time it was all over. Donegal played the ball nicely when in possession and were in front at the back when the Tones tried to engineer any kind of attack.

Donegal efficiently worked themselves into an eight point lead over the first 30 minutes. The northerners were first to the ball in the back line and the forwards were one step ahead of their markers. Donegal played the ball well into the forward line and enjoyed plenty of possession from the midfield exchanges. The Wolfe Tones showed well in the first quarter of the game, Jamie Murphy and Sean McVeigh pointed, each a fine score – but that was as good as it would get for the Tones. Donegal proceeded to take over for the remainder of the half. The Tir Chonaill men scored nine points to a single point for the Tones in final 20 minutes of the period. Dualtach Molloy was a sure thing with free kicks and put four in a row over the bar. The Tones could not find room when in possession and when Donegal had the ball, the South Boston side were searching for answers on how to stop their opponents. Donegal spread the wealth around; Eamon Murphy, Gareth Concar, and Ronan McNeilis also found the mark for Donegal before the half time whistle. 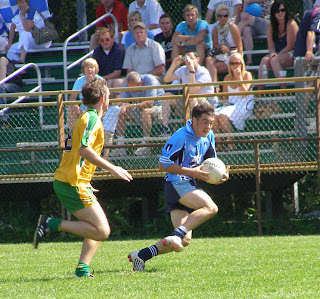 Joey Farrell tries to find an opening for the Tones as their attack sputtered in the first half.
The second half was a replay of the first, only worse from a Wolfe Tones perspective. Mick Sammon, who entered the fray as a sub, saw red as his challenge on Ciaran Bonner, who also came in for Donegal, was deemed worthy of a sending off. Dara Joyce put two early points over for the Tones, each a rousing score, but any encouragement that they may have generated were lost on the Tones. Donegal continued to pick off the points, and a goal with about 15 left from Concar well and truly killed the game. Donegal advance to final with an impressive performance and a margin of victory that nobody could have expected.