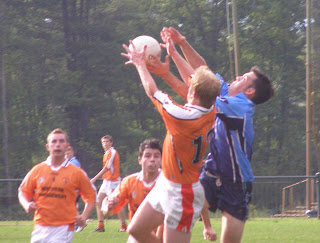 Brendan Quinn and Joey Farrell vie for posession.
With their fate in the senior football championship decided, all that was in it for the Wolfe Tones was to fulfill a fixture. Win or lose the Tones would be facing Donegal in next weekend’s semi-final, while the Shannon Blues had ended Galway’s hopes, and those of Armagh-Notre Dame, of having any chance of making the senior championship playoffs by finishing on 10 points with their win earlier in the day. The Tones started without a few of their first choice players, Sean McVeigh, Collie Farrell, and Willy Milner did not feature in the starting 13. John Nolan began the game in midfield for the Tones, but the St. Annes (Dublin) man was clearly less than 100% and looked to be carrying a leg.

After Marty Farrell put the Tones 2 points to the good, Armagh-Notre Dame enjoyed a slew of possession, but unfortunately for them were their own worst enemies as they failed to make the most of the period in ascendancy. There were several missed opportunities to score, and they were not half chances either. Maurice Mulpeters opened Armagh-ND’s account with a goal, and Martin McStravog added a point. The four points was all the northerners had to show for a sustained period of pressure lasting a good 10 to 15 minutes. Having soaked up the pressure, the Tones took over from there on in. After Sean Kelly and Brian Downes swapped points, Marty Farrell got the goal back for the Tones, and the South Boston side finished the half with three points on the trot from Billy O’Loughlin, Farrell, and Gary Collins.
Quinn tries to find a way through for Armagh-Notre Dame. 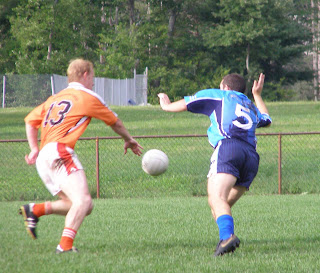