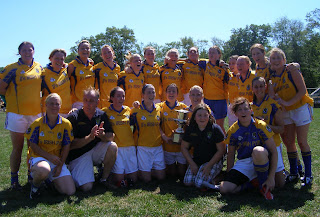 The Roscommon senior ladies added another piece of silverware to this year’s haul by capturing their first North American Championship. Roscommon and the Boston Shamrocks contested the Ladies senior football final. Roscommon entered as Boston champions and the Shamrocks stepped in as the second home team, and both made the final. Roscommon displayed some lovely football over the course of the 60 minutes and fully deserved their win. Coming out of the back line there was almost always a player on the move looking for the ball, and once play moved into the forward line the Roscommon forwards displayed some nice inter-passing. It did not help the Shamrocks cause that stalwart Sinead Walsh had to leave the field mid-way through the first half with what looked like and injury to the ribs. Karen Maloney lit up the scoreboard with some brilliantly taken points for Roscommon, and there were some scenes of great joy as Roscommon Captain, Laura Burns accepted the first North American trophy on behalf of the club.

Roscommon recorded a formidable score of 1-11 in the first half. A Maggie Fox goal after 7 minutes settled the side. Aisling Jennings put the Shamrocks on the board with a point from a free soon afterwards. Roscommon displayed some great shooting, notably Sligo native, Karen Maloney. The Shamrocks struggled to lift the Roscommon siege in the first half and get the ball out of their own half. Roscommon capitalized on their wealth of possession and led at the half by a score of 1-11 to 0-5. Maloney put two wonderful scores over the bar, both from the right side of the field. One was a fantastic long distance strike from play and the other from a sideline ball. The Shamrocks showed some flashes of what they can do, setting up three scores in a row for Ann Doherty, Jennings, and Mary Cullen in the final 10 minutes of the half. Roscommon, however, held a strong advantage at the break, but the Shamrocks would have a breeze in their favour in the second half. 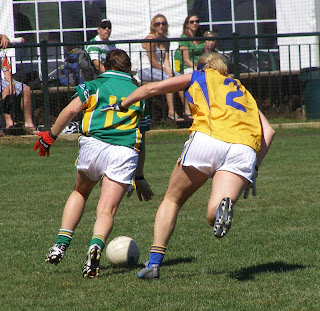 The Shamrocks made some inroads into the Roscommon lead early in the second half as they lifted their game. With the backs digging in and scrapping for every ball to deny Roscommon possession, Ann Doherty won the ball on the 65 and ran directly for goal. Doherty pulled the trigger 14 yards out and the ball struck the back of the net; the Shamrocks were back in it. Roscommon kept the pressure on. After Jennings tagged on a point for the Shamrocks, Roscommon responded with three points on the trot. Caroline Benson scored the first, and again, Maloney kicked a sideline over the bar and almost immediately afterwards followed with a great score from play; Roscommon were now back in the ascendancy. The Shamrocks kept up the fight to try and turn the tables. Another goal chance came – and went. Doherty was fouled in the penalty area and Jennings’ placed shot came back off the post. The Shamrocks added a point from a Jennings 21-yard free, but Roscommon finished the game as strong as they started, with three points in a row and few could argue that the Rossies did not deserve their first North American championship.