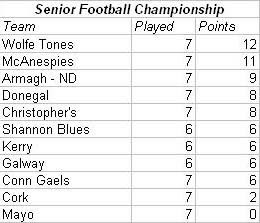 
Game 4 of the Ladies Senior Football Championship series takes place Sunday afternoon. Tir an nOg hold a 2-1 lead in games and could close it out with a win and retain the championship crown. Based on the last outing for these sides – a lopsided victory for Tir na nOg, it would appear as if this is the likely scenario, but the Shamrocks have a couple of things going for them. The Shamrocks have plenty of talent that can turn the game in their favour. Catriona Dolan and Niamh Woods for the backbone of the defence, while up front Treasa Doherty, Catriona Treanor, and Charlotte Delaney form a dangerous trio of forwards. Also, with more space to exploit,the big field might suit the Shamrocks better, the last game was played on the smaller field B. Tir na nOg have the comfort of knowing that they now have two bites at the cherry. This will be a battle for the ages as the Shamrocks are fighting for survival, and their Brighton based rivals will not want to lose the momentum that is in their favour.


Both of these teams harbor hopes of making the senior championship semi-finals. The winner of this game will still be in with a shout, while the loser will be condemned to the mediocrity of the intermediate playoffs. Galway are coming off a shock win over Christopher’s and the Blues are coming off a defeat to the high flying Wolfe Tones. Galway have some forwards that are hard to handle, Ryan O’Dwyer and Gearoid O’Connor will require some attention, and the never say die attitude shown by Galway this year is reflective of the type of attitude that has been the hallmark of Shannon Blues teams through the years. The Blues have some class forwards themselves, and in the half back line Dermot McElligott and JP Murphy are potential game changers. The Blues will be slight favourites going into the game and a Galway win will come as another surprise. However, don’t count it out as if Galway keep it close anything can happen in the last 15 minutes.


Both teams are coming into the game seeking some redemption, Tom's following a dismal outing against Galway, while Wexford are coming off a narrow loss to Cork. Tom’s are in bad need of a win to sustain their hopes and boost morale. Wexford will probably be regarded as favourites to win the game and there has been little to suggest otherwise based on performances so far this year, but if Tom’s can field a team with some starters returned to health it could be a competitive encounter. Wexford have an array of proven home based players in Dominic Magill, Peter Ryan, and JJ O’Neill combined with stars Ryan O’Dwyer and Stephen White, the Brighton based side will be hard to beat. Tom’s will be looking for Trevor Kelly, Fran Keenan, and if healthy to play, John O’Loughlin to lead the way. A Tom’s win will surprise many, but is certainly well within the realm of possibility.
Posted by Rory at 12:29 PM