There are 3 senior football matches on Sunday, each with its own tale to tell.  At 1:15 Galway will try to make it a second win of the season when they meet Christopher’s.  Christopher’s are trying to tally their first win of the season in their third outing and have yet to put together a full 60 minutes of coherent football.  With players of the caliber of St. Finbars man, Sam Ryan, at corner back, Dan Grehan in midfield, and Eddie Goggin up front the potential is certainly there for them.  Galway looked very good last week in their outing against Aidan McAnespies and what must have been encouraging for them was coming through a close game against a previously unbeaten side.  There are match winners in Kildare man, Cian McMonagle, Monivea's Craig Kennedy, and Alex Kenny up front, while the back line is solid and will not give much away.  Going to be an interesting one indeed. 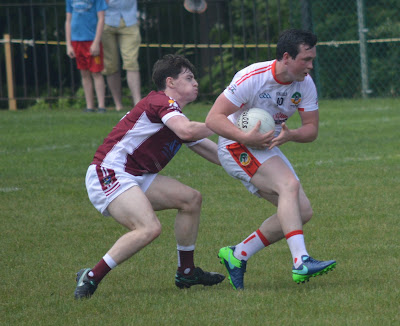 Next up are the Gaels and McAnespies.  Another intriguing contest with each team coming off a loss in their last outing.  The Gaels were well beaten by Donegal, while the Macs came up ever so slightly short versus Galway.  The Gaels have plenty to pick from, and perhaps that is part of their Achilles heel in trying to decide on the starting 13.  McAnespies on the other hand have had a well settled team since May, introducing newly registered players without upsetting the whole apple cart.  Key for the Gaels will be the 2 Dans from opposite ends of the country.  Dan O’Driscoll from Cork will be important in the middle of the field and Dan Lowe from Stewartstown County Tyrone up front will be looking to create the openings.  The home based veterans, David Black, Coleman Mulkerrins, and Ryan Caffrey will be looked to set the example and dig in when the going gets tough.  McAnespies have a strong, solid side with Sallins men Paul Clifford and Eoin Delmer at the back, while Che O’Donnell up front can break a tackle or two when in possession.  Robbie Crofts guile will be important up front; the Naomh Barrog man did not have a great outing last week and will be looking to correct that.  Expect a close one, and perhaps a firework or two as each side will be eager to set things straight again on Sunday. 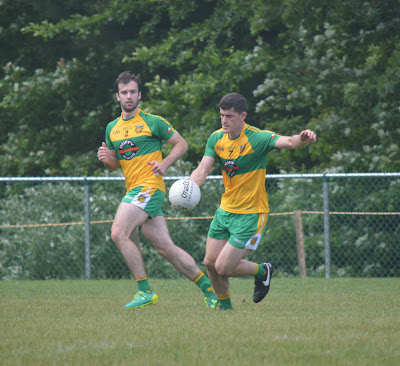 The final game of the Sunday at 3:45 features high flying Donegal and last years champions, Wolfe Tones.  Donegal came away with a one goal win last week in somewhat of a grudge match against the Blues.  The northerners needed substitute Lee Carr to come up with a couple of scores at the end to rest easy against the 12 man Blues, and might still be looking for better from one or two of the starting 13.  Stephen McBrearty is the key man and steady influence for Donegal in the middle of the field.  The Kilcar native never loses the head and uses the ball well, seldom wasting possession.  Up front it is Adan Neilly who is the dangerman at corner forward, and the Tones will do well to minimize his impact on the game.  The Tones are doing well so far.  At center forward Shane McGuinness has been a revelation, while Jarlath Boyce the main influence in the middle of the field.  The Tones will do well to keep themselves in this game as Donegal are one of the fancied teams this year, however a lot of resilience has served them well so far and may continue to do so on Sunday. 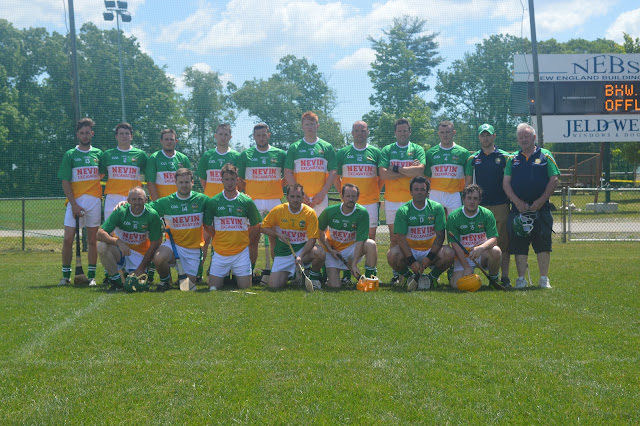 Junior A hurling sees Offaly and Tom’s on their first outings of the year on Saturday afternoon.  Offaly captured the Eddie Treacy Cup last season in convincing style and will be looking to get their defence off to a winning start.  Sunday Galway and Tipperary meet.  Tipp have looked impressive this year in their 2 outings, winning the Kieran Sheehan Cup and then last week a one sided win over Wexford earned their first 2 points.  For Galway is a first outing and Tipp will prove a tough test for the westerners.  The junior C hurling championship also continues in Concord, NH and Portland ME at the weekend.  Barley House Wolves are looking to make it 3 for 3 at home to Hartford, and Portland will be looking for their first win of the season at home to Worcester.


Plenty of junior football action in store as well.  Cork looking for a second junior A win, while Hartford travel to play the rebel’s junior B’s in Canton.  Canton will also see the first outing for the Kerry club as the Kingdom started their revival with a win in Hartford two weeks ago.  The Shamrocks and Connacht ladies also meet in a ladies junior encounter on Sunday to start Field B proceedings.


So, lots to look forward to and if last week is anything to go by, there is the potential for a couple of crackers.
By Rory O'Donnell
Posted by Rory at 9:54 PM