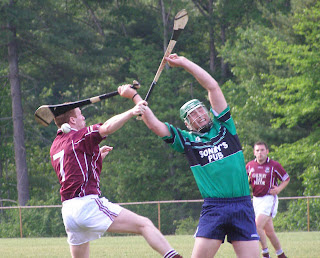 Western rivals Tom’s and Galway met in the baking heat that came a little earlier than usual this year. The Sheehan Cup holders seemed unable to raise their performance to that of their opponents. Galway fielded a team where there were many new faces and at least one old. Paul Carey, who last played for Galway seven years ago, returned to the side recently. Galway were ahead of their opponents in pretty much all facets of the game. Steadier at the back and sharper up front, Galway were full value for their win. Tom’s seemed to find it hard to get some fire into their game, whether it was the curse of the cup or the heavy weather is hard to tell.

Galway may not have significantly outplayed Tom’s in the opening period, but they certainly outscored their opponents. After almost a third of the game played, Galway led by a goal and five points, with Tom’s yet to score. Galway were steadier at the back and cleared what they should have, while Tom’s suffered a lapse or two. Tom’s hit three or four scoreable chances wide of the mark before Eoin Moran opened their account after 18 minutes with a point from play. Galway had made the most of their forays into the Tom’s back line. Liam Kinsella, Niall O’Sullivan, and Brian Geoghan (2) each pointed before a goal came from the aforementioned Sullivan. Sullivan was probably surprised to find himself through on goal as Tom’s should really have cleared their lines, but the sliothar found it’s way past the Tom’s defenders and O’Sullivan finished neatly into the far corner of the net. Derek Fitzgerald followed with a point that again he may have been fortunate to find himself in a position to take.

Tom’s pulled themselves back in the game in the latter stages of the half. Four points on the trot from Moran, Trevor Kelly, Ciaran Moore and Eoin Larkin put Tom’s back within four points. Eoin Foley and Brian Geoghan bookended the half with two scores for Galway to put the tribesmen six points to the good heading into the dressing room.

Tom’s relied on the free taking of Eoin Moran to keep them in touch for much of the second half. The Round Towers clubman accounted for all of Tom’s five points, while Galway maintained the edge with scores from Evan Daniels, Niall O’Sullivan, and Liam Kinsella. James Kinsella put the best score of the game over with a fine point. Kinsella came out to meet a ball coming into the Galway defence and fired over the bar from almost half way out. Mid way through the half David Brennan put the game away for Galway with a goal. Brennan slipped behind the defence and hit low under the keeper to put Galway seven points to the good. With Tom’s struggling to make an impression up front the result seemed in little doubt. Tom’s snatched a goal in the dying minutes from Trevor Kelly, but Galway finished it out with points from Niall O’Sullivan and John Byrne.