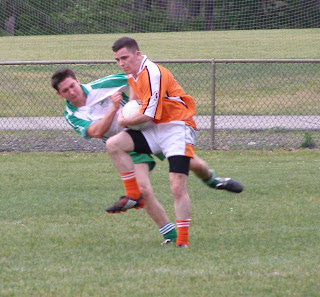 Christy O'Connor was a thorn in the side of the Gaels Defence.
Armagh-Notre Dame 1-14 Connemara Gaels 0-7

The final Game of the day featured Armagh-Notre Dame and the Connemara Gaels. The Brighton side introduced a number of new faces to make their debuts in the Canton heat, while the Gaels did likewise. If the Gaels were hoping for revenge for last years semi-final defeat, hope would fade very fast as Armagh-Notre Dame took a firm grip of the game and held on with an iron fist until the end.
The Gaels looked to have the better of the opening exchanges, but Armagh-Notre Dame imposed themselves on the game for the second 20 minutes of the opening period. Vinny O’Malley and James Carlin exchanged points with Brian Downs and Christy O’Connor, and with the sides level on two points each, Armagh scored 1-5 with the Gaels looking like they had no response. The Gaels could not pick up any possession from kickouts and even when the Dorchester based side did, possession was usually given away at first try – with various culprits. Armagh capitalized with a goal from Brendan Quinn, who won a clean ball on the edge of the square and fired home. Conor McKeever almost scored another major immediately following, but his shot hit the inside of the post and the Portadown man had to settle for a point on the follow-up. Further points came from Martin McStravog, Christy O’Connor, and Shane O’Donnell. Even at that the Gaels could have considered themselves lucky not to be further behind such was he level of dominance by Armagh-ND. 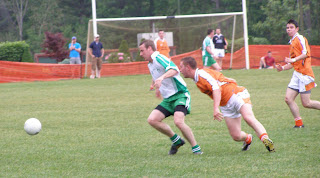 The Gaels tried to raise their game in the second half, but to no avail. Armagh-ND were too strong in the middle of the field; and Christy O’Connor and Brian Downes were a constant thorn in the sides of the Connemara back line. The Gaels managed to keep it fairly even in the second half, but their opponents seemed to be able to score when they needed to. James Carlin and Michael Geoghan each had chances at goal, but Kieran McKerr pulled off a great save from Carlin and was equal to the shot from Geoghan. O’Connor, McStravog, and Martin Donaghy pointed in the latter stages for Armagh-ND, While James Carlin, Vinny O’Malley, and Robert Hughes put some level of respectability on the scoreboard for the Gaels. Armagh-ND recover from their opening loss to the Shannon Blues, while the Gaels have work to do.
Gaels: J. Flaherty, B. McCoughley, T. McKiernan, K. Cox, G. O’Malley, P. McNicholas, Robert Hughes (0-1), M. Geoghan, Vinny O’Malley (0-2), J. Crossan, J. Geoghan, James Carlin (0-3), Tommy McDonagh (0-1). Armagh-ND: K. McKerr, J. Taggart, C. Gallagher, Shane O’Donnell (0-1), A. Downs, F. Meehan, Brendan Quinn (1-0), P. Mulgetzer, Brian Downs (0-2), Marty McStravog (0-2), Conor McKeever (0-1), Christy O’Connor (0-5), Martin Donaghy (0-2). Sub: Dominic McGill (0-1).
By Rory O'Donnell
Posted by Rory at 10:33 PM