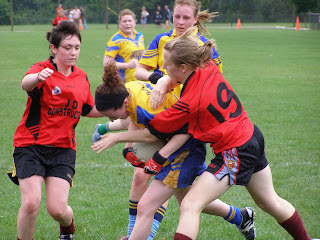 Roscommon's Erin McGirr gets tied up by the Tir na nOg defenders.

With the rain threatening to come down Roscommon and Tir na nOg met on a humid Sunday afternoon. Tir na nOg held a four point advantage at the end of the first half, but the way the game was going, it seemed like it would be all to play for in the second period. Tir na nOg, however, took control of the game after the restart thanks to some excellent play at both ends of the field. In defence and in attack the Brighton side outplayed their opponents and deservedly ran out winners.

The game opened with a flurry of scores from both teams. Within 5 minutes Tir na nOg held a two point edge over their opponents. A goal from Ciara O’Higgins separated the sides in the early going. Roscommon played some good football to get back into the game and even things up. Points from Caroline Benson, Imelda McNulty, and Karen Maloney evened the scores. Towards the end of the half Tir na nOg reestablished their lead. Starting with some sound defence, the Brighton side ended the half with a goal and two points to put themselves in good position for the second. The goal came courtesy of Lisa McAleer. Maria Keane’d free dropped short and McAleer was on hand to fist the rebound home. Grainne McClean and Colleen Barrett each pointed to give their side the advantage going into the second 30. 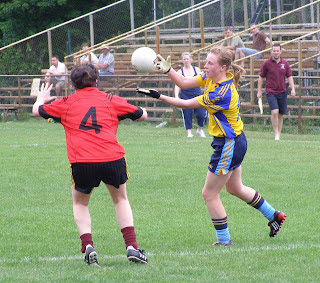 Tir na nOg took over in the second half and scored seven points on the trot. Roscommon could not find their way past a resolute Tir na nOg back line, and the Tir na nOg forwards put some lovely scores over the bar. Maria Keane scored what was probably the best score of the day. Colleen Barrett made a great run down the wing, found center forward Katie Murphy inside her, who in turn passed to the open Keane who slotted over from 25 yards. At the other end of the field Fiona Gohery denied Roscommon on two occasions with point blank saves. Angie Monaghan also put in a great display in the full forward line for Tir na nOg and rounded out the scoring for the game. Roscommon did have the two goal chances and also hit the crossbar, but had they pulled anything from the game would consider themselves to have stolen it. Roscommon are zero for two, but also got off to a bad start last year and ended up champions.