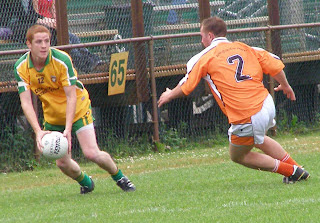 Letterkenny man, Dualtach Molloy, looks for some help as Donegal go on the attack.

In a highly anticipated encounter, Donegal and Armagh-Notre Dame played hotly contested 60 minutes of football. In a four-goal final quarter, it was Donegal who were still standing after both sides fought hard for the win.

The first half was evenly contested, one could have argued that Donegal had a slight advantage on the balance of play, but there was just the minimum separating the teams on the scoreboard all the way through. Donegal had to work hard in defence to keep a good Armagh-ND forward line in check, while the Donegal forward line could have done a little better with the possession that came their way. There were a few attacks that broke down due to overplaying the ball. Armagh-ND opened the scoring with points from Martin McStravog and Liam Morrow. Donegal got themselves on the board with a point from Keith Cunningham. After Martin Donaghy put a third over for the Brighton side, Donegal struck with a goal from Kieran Mulvihill. The Ballylongford man finished well from 20 yards out and just the keeper to beat. Donegal one point to the good with 11 minutes gone, and the Tir Chonaill men would stay ahead for the remainder of the half. The sides traded points, Dualtach Molloy and Mulvihill for Donegal and McStravog, Downs and Donaghy for the Orchard County. At the half Donegal led by a single point, 1-4 to 0-6.
Donegal started off the second half with a brace of scores to extend their lead to three points. Ronan McNeilis and Molloy pointed for Donegal; the northwesterners got their passing game together and translated their improved play into scores. The game started to get physical and there were some lengthy stoppages as a result of injuries and one or two scuffles. As the sides began to tire in the final quarter the goals came. Armagh-ND leveled the scores with a goal out of nothing, a high ball down the middle was not dealt with and Brendan Quinn found himself through with just the keeper to beat. Quinn sold a dummy and rounded the keeper to slot home. Almost immediately Donegal regained the lead with a somewhat fortunate penalty. Ronan McNeilis ran through and when challenged in the penalty area fell to the ground, and the whistle went for a penalty. Dualtach Molloy took the shot, which was saved, but Molloy volleyed the rebound into the back of the net. 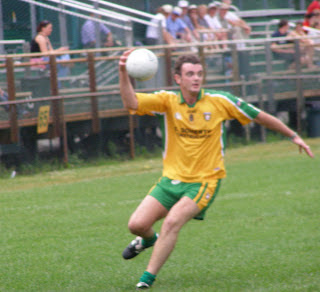 Not to be undone, the Orchard county struck again with a second goal, again from Quinn. The ball found Quinn unmarked at the far post and the half forward sold the same dummy, and again finished into the empty net. The sides were level again going into the final five minutes. Brian Downs put the Orchard men one point ahead with a well taken free, but Donegal had a third goal in them. Donal McNulty leveled the scores with a Larry Bird-like steal as Armagh-ND were coming out of defence, and a minute later Keith Cunningham stole behind the Donegal defence from his half back position, was played through and with the keeper to beat, and did well to force the ball into the back of net. With time still left on the clock Armagh-ND brought the game back within a point. Colin Murphy saved well to deny Donaghy a goal and parry the ball over the bar and deny a possible winning goal to the Orchard county men. After a keenly contested 60 minutes of football, it was Donegal who emerged one-point victors.