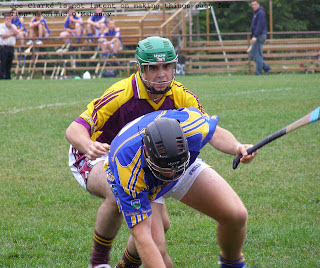 While Dublin and Wexford played to a draw in the Leinster senior hurling championship Saturday evening, 2 players who might have faced each other in that game had circumstances been different, ended up facing each other in Canton on Sunday afternoon. Tipp fielded with Dublin and Craobh Ciaran hurler Alan McCrabbe at wing forward, while Richie Kehoe, who was on the Wexford panel fielded for Wexford in the middle of the field. In the end it was Wexford and Kehoe who took the spoils with a good display of hurling.
Wexford owned the first half, which included a strong display from Kehoe. Wexford seemed to be better at supporting the play and the man with the ball, and picked up most of the breaks. Wexford had 4 points on the board before Tipp recorded a score. Cillian Starr, Kehoe (2), and Peter Ryan notched up points before Phillip Donnellan put one over for Tipp. The sides traded scores for the remainder of the half. Tipp kept in touch through the free-taking of McCrabbe, while Wexford recorded scores from Christopher O’Connor, and Kehoe. With Tipp needing a score before half time to put them in position to try and turn the tables in the second half, it was Wexford that struck with a goal. Kehoe took the first shot that was parried by Mark Daly in goal for Tipp, and Cillian Starr was on hand to put the rebound into the net. At the half Wexford held a seven point advantage. 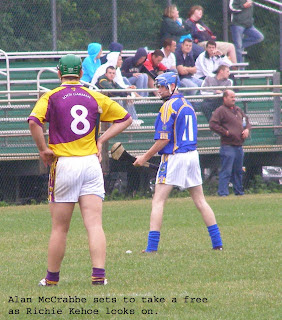 Tipp introduced a few subs in the second half in an effort to raise their game, and it worked to a certain extent. Tipp worked harder and displayed a greater sense of urgency, but could not eat into Wexford’s lead. McCrabbe, Niall McCormack, and Cronan Dempsey pointed for Tipp, but Wexford maintained their advantage through the scoring of Christopher O’Connor, Cillian Starr, and a massive booming point from Kehoe. Towards the end of the game Tipp went in search of a much-needed goal, but the Wexford defence held out. Two points for Wexford as they embark on their defence of the Boston championship.