Christopher's made the senior football final by beating Kevin Barry's of Philadelphia in the semi final. After a tight first half at the end of which Christopher's led by a score of 1-8 to 1-6, the local side pulled away in the last 15 minutes of the game with some fine fielding from Dan Kenneally and scores from Ian Rowland. Christopher's will meet Parnells from Chicago in the final.

Both Wexford and Tipp made it to Sunday's senior hurling final. Wexford had a rather easier time of it against Harry Boland's from Chicago, while Tipp edged out San Francisco's Na Fianna with a pointed free,which proved to be the last puck of the game (see report).

Aiden McAnespies juniors made it to the final, beating Charlotte James Connolly's in the semi-final. After a close first half, the local side pulled away in the second. McAnespies will have to beat a very strong looking Chicago Wolfe Tones to capture the junior football championship.

There would be no local participation in the Intermediate Football Final as the Connemara Gaels went down to a heavy defeat at the hands of Young Ireland's from Philadelphia. The Gaels fielded a severely depleted side that featured a half dozen juniors, and ended up on the wrong end of a 2-12 to 1-6 scoreline.


Armagh-Notre Dame were pipped by a very good Sons of Boru team from San Francisco by a score of 3-7 to 3-8. The San Francisco side looked like they were cruising, with less than 10 minutes to go led by eight points. Darren Gilsenan and Domininc Magill pointed for the local side, while Darren Maguire popped up to score a goal. There was now three points in it and the Brighton lads were pushing hard for the equlaizing score. The westerners then scored what proved to be the winning point as Armagh-Notre Dame netted on the final whistle. 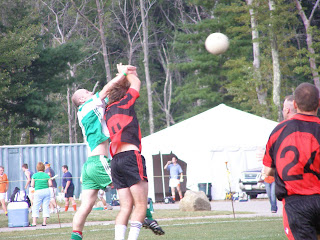 Michael Devanney contests a high ball for the Gaels. 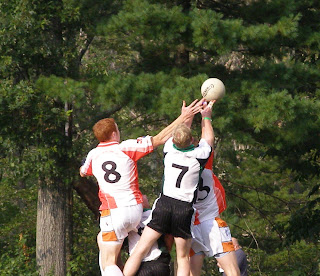 Brian Boylan and Armagh-Notre Dame just missed on a place in the Intermediate football final by the narrowest of margins.
Posted by Rory at 4:41 PM