Christopher’s followed their first Boston Senior Championship last week with a North American title. It was a significant moment, Christopher’s fielded a team with 5 American Born starters and ended the game with 7. In fairness the manner in which the home team ran away with the game allowed for giving everybody a run. Right from the get go it was clear that Christopher’s were the superior side by a long shot. After the first 30 minutes Christopher’s led by 9 points and it just became more one-sided in the second half. 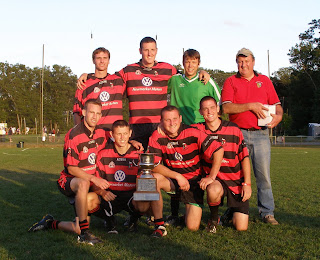 Christopher’s had to literally change their shirts inside out since there was a clash of colours and the home team are the ones to oblige. Having turned their shirts inside out, Christopher’s proceeded to turn Parnell’s inside out with some dominant performances in all over the field. Dan Kenneally impressed in midfield and Parnells had no answer for the eldest of the three Kenneally brothers on the field. Sean Kelly was on form at center forward and in the corner Finbarr (Barry) O’Driscoll put in an effortless performance. Christopher’s had seven points on the board before Parnells opened their account with a point from center forward Martin Rafter. Parnells forays into opposition territory were few and far between. Martin Hogan, Brian Lonergan, and Brendan Kelly proved a tough barrier to get around for the visitors. With Christopher’s ahead by a score of nine points to two, Barry O’Driscoll netted a fine goal. Sean Kelly worked hard to win the ball back and found O’Driscoll who planted his low shot into the bottom corner. As half time approached there was a scare as Lonegan and Dan Kenneally had to leave the field for treatment due to a clash of heads. 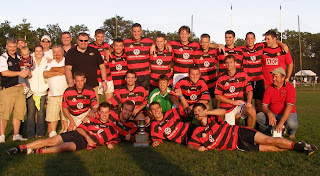 The injured players reentered the fray to begin the second half. Parnells accounted for the first point after the restart through Brendan Doherty and for the first 15 minutes matched Christopher’s. Doherty and Rafter put a couple of points together, but this may have something to do with Dan Kenneally having to receive some additional treatment to his head injury. Scuffles began to break out and after swift warnings from the referee matters settled down again. The game was over for sure 18 minutes into the second half. Jerry Kenneally goaled from close range in the 17th minute, and O’Driscoll followed with another one minute later. Paudie Kenneally found the net with Christopher’s fourth goal two minutes later, and with the final scores of the game, Rowland and Paul Bannon put the finishing touches on an amazing season for Christopher’s.

Who won the intermediate football?