The Fog City Harps turned it on in the second half to claim the ladies senior North American Football championship. There was a point between the sides at the end of the first half, but a goal from the throw-in at the restart followed by a flurry of points put the west coast ladies in control, with the local side playing catch-up for most of the second half. 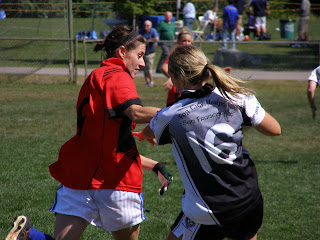 Tir na nOg's Niamh Daly tried to put the shackles on Gemma O'Sullivan.
Sinead Bunyan opened the scoring for the San Francisco side with a well taken point. Tir na nOg answered with back to back scores from Laura Breathnach and Emma Conlan. Harps answered in kind. It was to and fro as each side put together some good passing moves. Claire Hehir pointed in fine fashion for Tir na nOg and was followed by Sheila Moran as the scoring was spread out between the home forwards. Fog City were a match however, and Sinead Bunyan at full forward was proving to be particularly effective, pointing twice more before half time. After an evenly contested half, Harps led by a point.
The second half was a different story. Jillian Joyce was introduced and the Galway county footballer proved effective in spite of being somewhat hobbled by a knee injury. The west coast side netted right from the restart through Siobhan Dolan and followed with some quick fire points as Tir na nOg were caught off guard. The visitors kept the squeeze on and did not let their opponents free from the chokehold that they held on the game. Joyce, Dolan, and Gemma O’ Sullivan added points as the game got away from the home team. Tir na nOg eventually found their feet, but by the time they managed to put some scores over the bar it was too late. Emma Conlan, Claire Hehir, and Catriona Traynor pointed, but another goal came for Harps from the boot of Joyce. Disappointment for Tir na nOg, and a well deserved victory for a good San Francisco side.