Eire Og regained their place as kingpins of North American Camogie with a well deserved victory over Shamrocks of San Francisco in the Final. The early morning conditions were blustery and not the most ideal, but both teams coped well with the conditions. The game was keenly contested, and after a close first half, Eire Og displayed some fine shooting and pulled away in the final 15 minutes. 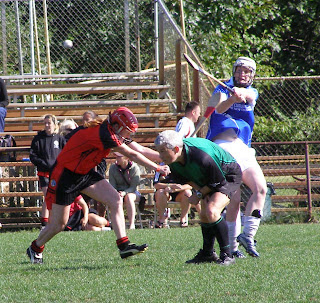 DUCK! Referee and Shamrocks alike had to duck as Fiona Gohery plays the ball.
Eire Og got off to a fine start to the game. The locals established an early goal and 2 points lead before the Shamrocks opened their account through the stick of Ciara Moran. Eire Og struck right back with a goal and two points and led by 2-3 to 0-1 with 10 minutes to go in the half. Fiona Gohery converted a penalty after Riona Daly was brought down, and shortly afterwards Gohery pointed from a 65. The Shamrocks were hardly out of it however, and Sharon O’Brien was forced into making a great save. The San Francisco side kept pushing and had a goal disallowed for an infraction in the square. Eventually the visiting side were rewarded with a goal from Suzette Bradley and soon afterwards another three pointer from Moran. At the half Eire Og held a slender 2 point lead. 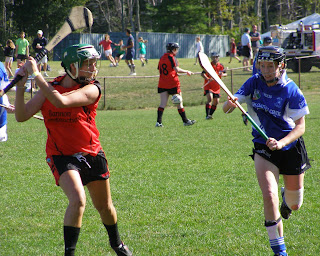 Shamrocks continued to fight and made the Eire Og defence work hard.
Shamrocks leveled matters two minutes into the second half. After Gohery had put Eire Og three points ahead, Rebecca Bienat netted for Shamrocks. Eire Og took advantage of the slight breeze and proceeded to put some lovely scores over the bar. Gohery pointed twice and Sarah Kelly pulled a score back for the visitors. The intensity rose as the game entered its final quarter. Every ball was eagerly contested. However after Gohery put a fantastic point over the bar from her weak side, Eire Og began to pull away. Maureen Meehan followed with a goal and holding a five point lead, Eire Og found themselves having to put some work in on the defensive end. Ann Greally moved into the back line and worked hard, as did Aodeen Snee and Sharon O’Brien was called upon to pull off some saves. When Caroline Hanley, and Riona Daly each pointed from distance and Caroline Hanley scored a late goal, it was all over. A fine overall display from the home team as the trophy remains in Boston.
Eire Og: S. O’Brien, A. Snee, N. O’Neill, C. Hanniffey, E. Dolan, M. Keane, N. Daly, M. McElroy, C. Hanley, F. Gohery, R. Daly, A. Greally, M. Meehan. Shamrocks: G. O’Sullivan, S. Bradley, D. Ryan, S. Kelly, K. Burke, C. Moran, S. Boyle, M. Keogh, R. Biernat, D. Cunningham, S. Lynch, A. Bryant, A. Morrissey.
By Rory O'Donnell
Posted by Rory at 1:44 PM