Tipperary and Na Fianna played a tremendously exciting semi-final, and Tipp gained revenge for last year when they fell at the semi-final stage to the San Franciscoans. The last puck of the game from corner back, Daithi O’Mahoney decided it. Tipp won a free on their own 65 and the Islegate clubman put it over to put Tipp into an all Boston final against Wexford. 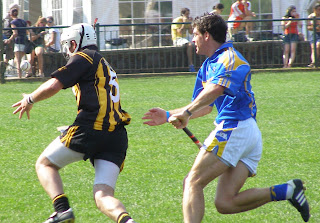 Na Fianna's John Fox runs at the Tipp defence.
Na Fianna got off to a flying start with two early goals. Eamonn Brennan put both away as the corner forward waltzed through the Tipp defence to finish from close range. Pat Howard and Paul McGrath had each pointed for Tipp between the goals, but Na Fianna looked the stronger side the early going. Wallace, John Fox, and Aidan O’Sullivan each pointed and Na Fianna led seven points. Tipp worked their way back into the game. Cronan Dempsey and Noel O’Grady lifted things around the middle, and the free taking of Pat Howard and O’Mahoney made the west coasters pay for defensive indiscipline. O’Grady and John McGrath scored a couple of nice points from play, and with Tipp trailing by three points, Tipp won a free about 30 yards from goal. Paul McGrath took a short one to O’Mahoney,and O’Mahoney’s shot found it’s way into the net to level the scores heading into half time. 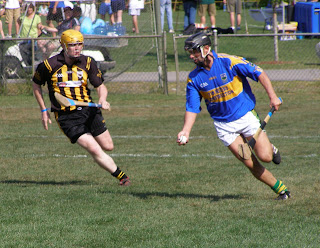 Tipp's Paul McGrath rounds his marker to score a lovely second half point.
Tipp played some nice hurling in the opening stages of the half. Two Pat Howard frees put them in the lead for the first time in the game, but center back John Fox goaled for Na Fianna. Howard brought the sides level again with a free, and Na Fianna won a penalty which was blocked on the line. Mike Lawlor mopped up with a point and the westerners led again. Pat Howard and Conor Kavanagh brought Tipp back ahead with two points, and yet again the lead changed hands as Na Fianna pressed for the victory. Lawlor pointed twice as at times the Tipp defence was opened up, but Na Fianna failed to deliver the fatal blow. Jim Howard made showed a steady nerve on several occasions and Tipp somehow remained in contention heading into the last few minutes. Again it was fouls that proved to be the undoing of Na Fianna. Pat Howard drew Tipp level with a free and Tipp then spurned a few good chances to go ahead. Then came the deciding score from O’Mahoney and Tipp meet Wexford for the North American.

Tipp: J. Howard, M. Heffernan, D. O’Mahoney, C. Power, N. O’Grady, B. Howley, C. Dempsey, B. Lonergan, P. Howard, D. Kealy, C. Kavanagh, J. McGrath, P. McGrath. Na Fianna: M. Bargary, B. O’Hehir, M. Sheedy, G. Wheelock, J. Fox, T. Carroll, Wallace, D. Young, A. O’Sullivan, S. Byrne, M. Lawlor, B. Walsh, E. Brennan.
Boston runners up, Wexford, faced Harry Bolands of Chicago in the first semi-final and came out winners by a score of 5-10 to 1-10. The game was level early in the second half. Wexford led by three points at half time, and after Boland’s leveled the scores with a goal, Wexford pulled away. Kieran O’Rourke from the back line lifted Wexford’s performance with some forays into the Boland’s back line. After Tony Murphy put Wexford a point to the good the floodgates opened and Wexford netted three times and pointed once to run out comfortable winners in the end.
By Rory O'Donnell
Posted by Rory at 4:33 PM