Fr. Tom’s juniors faced a tough Naomh Padraig from San Francisco in Sunday’s final. The game was always on the line as apart from the first 10 minutes, there was never much more than a score between the teams. Na Fianna trailed by four points at the break, but made a comeback in the second half and came within a point. Tom’s survived a few scares late in the game and had David Hession to thank for some solid goalkeeping in a tremendously exciting finish. 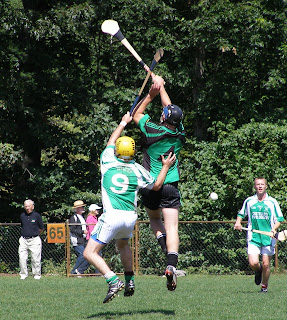 Fr. Tom's James Brett and Stephen Noonan of Naomh Padraig contest a high ball.
Chris Cullinane pointed for Tom’s to open the scoring. Naomh Padraig hit two early wides before Kevin Mooney put Tom’s two to the good. Tom’s added a third point before Naomh Padraig got on the board through Stephen Noonan. Noonan and Timmy Buckley worked very hard in the forward line for the west coast side, Noonan pointed a second and Buckley a third before half time. Tom’s kept ahead through the free-taking of Cullinane as the balance of play broke even. At the half Tom’s led by four points.

Naomh Padraig pushed Tom’s all the way in the second half. A goal after 10 minutes brought them right back into the game and Noonan followed with a point. Tom’s had to fight hard to keep themselves in front. Aidan Staunton worked hard in the half back line, and on a number of occasions David Hession made some great stops as Na Fianna threatened to add another goal to their first. Robbie Croft put Tom’s two points to the good with an unusual point that came off the top of his helmet, and Keenan put a score between the teams with another. Tom’s had to resort to some desperate defending in the final minutes and managed to hold on to win their first junior championship since 2003.

Aidan Staunton was awarded the MVP for the game, and throughout the season Mike Moore, Larry Giunan and Sean O’Brien made significant contributions.