Both sides contest a kickout.
Christopher’s got off to a slow start and some sloppy play did not help their cause. It took some time to shake off the rust, but by the time if was shaken it was too late to mount a serious challenge to the Orchard men. The northerners led by 10 points at the half. Some newcomers to the Brighton based side helped their cause, Craig Berrigan in the middle of the field, along with Johnny Cooper in the back line and David Quinn at corner forward tightened up a side that was well beaten the previous week. As Christopher;s were finding their stride, their opponents were firing over the points. Quinn and Darren Gilsenan caused grief to the Christopher’s back line, and after 20 minutes Quinn showed some quickness to shake off his man and the man from the Na Fianna club in Dublin netted. At the other end Cathal McNally almost did the same for Christopher’s but the Kildare U-21 fired his shot over the bar when a goal might have done much to settle Christopher’s. 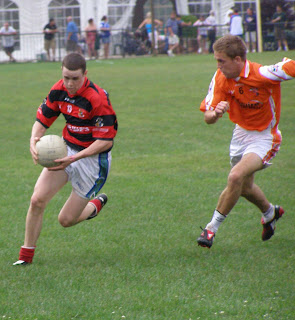 Christopher's Cathal McNally is pursued by Johnny Cooper.
Christopher’s settled somewhat in the second half, but at that stage the horse had left the barn. David Nation, McNally, and Mark O’Sullivan pointed. O’Sullivan had entered the fray but found it tough going with the attention of Conor Brophy keeping the big man under wraps. The Brighton side continued to add to their tally. The hard working Quinn goaled again and additional points came from Fergal McClelland and Shane Murphy before the final whistle. Christopher’s spent much of the half in search of a goal and generated a few chances, but their opponents kept them from netting a consolation goal. A good outing for the current Boston Intermediate champions, and some work to do for the senior holders.
Christopher’s: P. Kenneally, N. Ryan, G. O’Riordan, P. Moloney, C. Brosnan, B. Kelly, D. Kenneally, J. Kenneally, J. Moylan, J. O’Leary, D. Nation, E. McCarthy, C. McNally. Armagh-ND: P. Geraghty, G. Gilsenan, C. Brophy, A. Doyle, J. McCormick, J. Cooper, C. Berrigan, S. Dineen, S. Murphy, D. Magill, D. Gilsenan, D. Quinn, S. O’Hare.