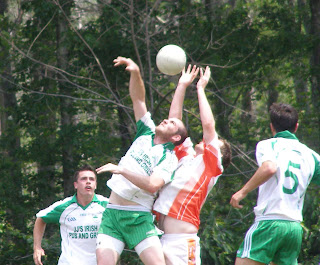 The Gaels Gary O'Malley and Armagh-Notre Dame's Paddy McGoldrick contest a kickout.
Kevin Feeney showed in the early going at corner forward with a goal and two points, while Mike McDonagh added a second goal as he surged forward from wing back. The Gaels worked the ball well from the back line, and the forwards put the possession to good use. Adrian Murphy was pivotal at center back for the Gaels and used the ball well. Murphy also popped up from the half back line to float one over the bar. Armagh-Notre Dame threatened on occasion. Gavin Hall pointed and Colin Bradley almost volleyed into the net just before half time, but the corner forward’s show shaved the top of the crossbar. The Gaels led by a score of 2-5 to 0-3 at the half. 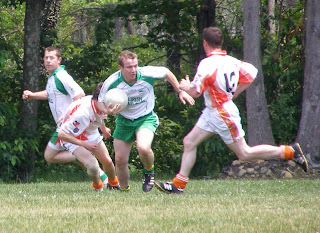 Kevin Owens looks for a way though the Armagh-Notre Dame defence.

The Gaels continued to press home their advantage in the second half. Gary O’Malley and Darren O’Meara worked hard in the middle of the field and points came from the boot of Kieran Cox, Vinny O’Malley, Simon Hickey and Kevin Owens. In spite of some good performances from Cormac O’Toole, Hall, and Bradley, try as they may the Brighton side could not turn the tide. A good second win for the Gaels juniors while the northerners still in search of their first.