Wolfe Tones 0-12 Christopher’s 1-9
Christopher’s will have been the more disappointed of the teams with the result. Having trailed for three quarters of the game, Christopher’s persistence paid off, and a flurry of scores in the second half saw the Boston champions take a two-point lead with time winding down. Tones also lost key player Gary Brilly, who was sent off for a second yellow card as time ran out and a win looked on the cards for Christopher’s. However, Tones rallied in injury time to even the scores and maintain their unbeaten record, while from a Christopher’s viewpoint, it was a win that slipped away. 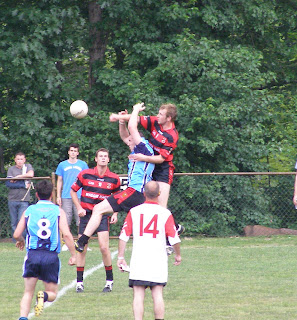 Christophers' Sean O'Hare gets his first to this kickout.
The Tones enjoyed a significant advantage in the first half and played the much better football. Wing forward, Donal Armstrong, put three well-taken scores over the bar from play as Christopher’s back line struggled to cope with the Tones forwards. The champions also struggled at the other end of the field as they kicked three bad wides during the first 15 minutes, failing to tally a score in the opening quarter. The impressive Armstrong opened the scoring after six minutes. Mike O’Brien and Marty Farrell added well taken scores for the Tones. After a barren first 15 minutes, Christopher’s caught a break and netted through Cathal McNally. McNally side-footed a ball that broke from a challenge between David Nation and Willie O’Dowd into the empty net and the sides were level. The goal did not do much to break the Tones hold of the game however. Armstrong popped up on the wing for two points from play, and Farrell stroked two frees over the bar to establish a four-point lead and keep the Tones very much in control. Hope sprung for Christopher’s as in the final two minutes of the half, McNally put a free over the bar and the Kildare U-21 followed with a point from play. Things then got a little testy; Gary Brilly and Sean O’Hare each received a yellow card for an off the ball scuffle. Having played second fiddle for the first half, Christopher’s trailed by just two points at the break. 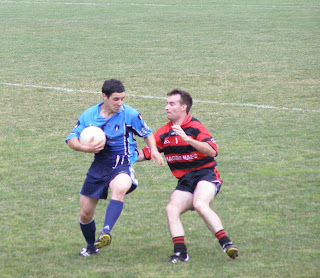 Noel Ryan challenges Wolfe Tones' Marty Farrell.
The second half began with a booming Dan McCabe free from 45 yards that split the uprights, and it was matched in-kind with a Sean O’Hare free from a similar distance for Christopher’s. The sides traded scores as Christopher’s began to find their way into the game. The champions then went on a run and worked their way into the lead. Points from Cork under-21 and Nemo Rangers Clubman, David Nation, Cathal McNally and Barry McNally, propelled Christopher’s into a two point lead. With the Tones losing their way with some wayward passes into the forward line, and with the bit between their teeth, a victory for Christopher’s looked inevitable. With about a minute remaining the Tones looked well and truly doomed when Brilly was given his marching orders. With Christopher’s begging for the final whistle, the Tones found that they had something left in the tank. Marty Farrell brought the South Bostonians within a point and a pointed free from midfielder Mick McGee late in injury time, to the jubilant cheers of their supporters, saved a point for the Tones. Christopher’s can take heart from their second half performance, however will need to learn how to lock the door in crunch time if they are to successfully defend their title.
Tones: W. O’Dowd, E. Naughton, N. Devereaux, M. O’Brien (0-1), D. Kinahan, K. Regan, J. Farrell, M. McGee (0-1), D. Armstrong (0-4), G. Brilly, D. Kelly (0-1), D. McCabe (0-1), M. Farrell (0-4). Christopher’s: P. Kenneally, N. Ryan, C. McDonald, C. Aylward, B. McNally (0-1), B. Kelly, D. Kenneally, S. O’Hare (0-1), D. Nation (0-1), A. Moloney, E. McCarthy, D. Ward, C. McNally (1-5). Sub: Buckley (0-1).
By Rory O'Donnell
Posted by Rory at 4:07 PM