Tír na nÓg 2-14 Boston Shamrocks 3-5
Tír na nÓg took up from where they left off last year and drew first blood in this Ladies senior football encounter. The Shamrocks struggled to match the Tír na nÓg midfield. Emma Conlon exerted enormous influence on the game with much of the play going through her, and showed that she is also capable of taking her own score. In the second half Laurie Ahern lifted things for Tír na nÓg and helped prevent a Shamrocks comeback. 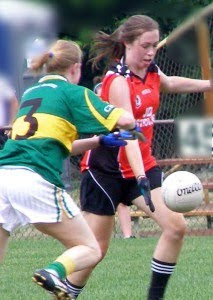 Shamrocks full back Joanne O'Connell tries to block Niamh Coleman's shot.
Tír na nÓg went into an early 0-3 to 0-1 lead, and after Conlon extended the lead with a well taken point the midfielder got on the end of a ball played across the face of goal to put the Brighton based side into a nine point lead. Charlotte Delaney pointed for the Shamrocks as they battled to get back into the game. Tír na nÓg however continued to motor and extended their lead further. Conlon and Grainne Collery put three points over the bar between them. The current Boston champions did not have it all their own way however. Center forward Charlotte Delaney looked dangerous when in possession and the Shamrocks struck back with a goal from Sinead Fadden who finished from a tight angle to narrow the gap. Teresa Doherty added a point from corner forward to make it a five point game. Conlon extended the Tír na nÓg lead to six with a point just before half time, and Tír na nÓg keeper Deirdre Kelliher saved well from Gillian Coyle to prevent the Shamrocks from getting any closer before the break.
Coyle did better with another goal chance just after the restart and finished a sweeping downfield move to bring the Shamrocks within two points, but some stout defending from Andrea Bowie at wing back and Lisa Brick at full back held off an early second half Shamrocks assault. Laurie Ahern, partnering Conlon in midfield for Tír na nÓg, lifted the siege with a point and followed with a second and the day looked like it would belong to the girls in red and black. After Sinead Fadden put one over for the Shamrocks, Conlon hit with a second goal. Ahern added another point. Jennifer Norman put a consolation goal away for the Shamrocks. A good win for Tír na nÓg, but based on the Shamrocks fighting display the Brighton side will not have it as easy a run at it this year.
Tír na nÓg: D. Kelleher, L. Gilmore, L. Brick, C. Donovan, A. Bowie, A. Kelly, A. Waters, E. Conlon, L. Ahern, C. Hanley, N. Daly, N. O’Neill, C. Kelly, N. Coleman, G. Collery. Shamrocks: C. Dolan, N. Nugent, J. O’Connell, J. O’Doneghue, N. Hurst, A. McDonnell, M. Corrigan, C. McGinley, J. Norman, S. Moloney, C. Delaney, J. Sloan, G. Coyle, S. Fadden, T. Doherty.
By Rory O'Donnell
Posted by Rory at 10:15 AM