An entertaining but testy game of hurling went down to the wire as Galway battled for three quarters of the game with a man down. Aidan Callnan was shown a red card after a dangerous challenge after 15 minutes of play. At the time Galway held a slight lead that they managed to maintain until half time. In the second half Tipp pulled ahead with points from Shane Burke and substitute Pat Leahy, but Galway almost salvaged a point as the tribesmen drew level with a minute left only to see Paul McGrath put the winner over the bar for Tipp in injury time. 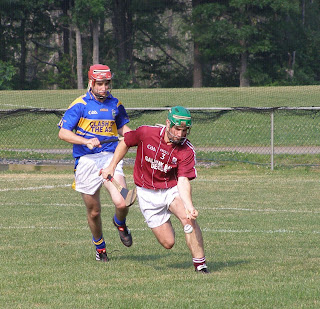 Shane Murphy meets the ball with Kieran McGrath in close pursuit.
The first half was marked by the sending off of Galway’s Aidan Callnan after 14 minutes who was adjudged not to have been challenging for the ball when swinging his stick. Galway held a one-point lead at the time and managed to extend it to two by half time. Shane Murphy was the marksman for the westerners, tallying four points from frees. A goal came from Kilkenny native Willie O’Dwyer whose low drive ended up in the back of the net. Tipp’s Shane Burke inflicted a lot of damage on Galway with some well taken points from play, while Michael Gleeson and Martin Boran each pointed twice. With the extra man, Tipp’s defence mopped up numerous aimless balls played into the Galway forward line as scoring became more of a challenge for the tribesmen, but their back line held firm. At the half Galway led by a score of 1-6 to 0-7. 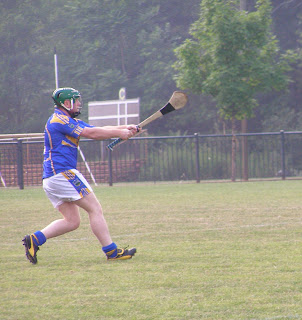 Mike Meehan clears the ball for Tipp.
Tipp set about overturning Galway’s lead and went on a 6 points to 2 scoring streak to open the second period. Derek McNicholas, Burke, and substitute Pat Leahy turned the tide on the scoreboard. Murphy put Galway’s 2 points over the bar as life got tougher for the Galway forward line. Galway moved Shane Maher to the edge of the small square, and Maher caused havoc with Galway floating high balls his way. Galway won a 21-yard free, and with plenty of time on the clock, Maher went low and Tipp saved the shot. Maher converted his next chance as he got on the end of a Greg Lally ball, and soon afterwards looked to have won a penalty after catching a high ball and getting dragged down, only for the umpire to have judged that he was in the small square before winning the ball. With the reprieve, Tipp gathered themselves and Martin Boran relieved the pressure with a point. Galway pulled themselves level as the anticipation rose around the ground. Enda Concannon pointed and Shane Murphy converted a free with a minute left. Murphy had a chance to put Galway ahead with a long range free, but the ball drifted wide. In injury time Paul McGrath, who entered the fray in the second half, made room for himself and from 25 yards put the winner over the bar for Tipp. A close call for Tipp, and a game that will leave Galway wondering what might have been.
Galway: E. Ward, J. O’Callaghan, C. O’Driscoll, G. Lally (0-1), B. Regan, J. McCormack, M. Farrell, A. Callnan, S. Dineen, S. Maher (0-1), E. Concannon (0-1), S. Murphy (0-7), W. O’Dwyer (1-1). Tipp: T. Lowry, B. Kenny, K. McGrath, M. Meehan, K. Joyce, S. Hickey, C. Dempsey, J. O’Keefe, M. Gleeson (0-2), D. McNicholas (0-1), S. Burke (0-6), A. Devine, M. Boran (0-3). Subs: P. Leahy (0-2), P. McGrath (0-1).
By Rory O'Donnell
Posted by Rory at 4:18 PM