Armagh-Notre Dame 3-14 Cork 3-6
Armagh-Notre Dame comfortably took two points from a Cork side that kept themselves in the game by way of the goal, but as the afternoon turned into evening in the last game of the day, the sun set on the hopes of the rebels of pulling off a victory. Cork battled gamely for the 60 minutes, but against a more balanced Armagh-Notre Dame, which contained a deadly forward line combination of David Quinn and Seamie O’Hare, were unable to keep pace over the distance. 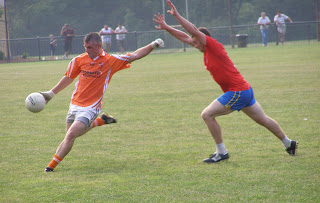 Dominic Magill gets his shot off under pressure.
The Brighton side picked off points early and took a commanding lead. After 15 minutes the men in orange led by five points, 0-6 to 0-1. Early on David Quinn looked as impressive as ever at corner forward, his marker, Aaron Cahilane looked like he would be in for a tough hour trying to pin down his speedy opponent. Dominic Magill opened the scoring with a well taken point, and Quinn followed with 2 quick scores. Derry O’Callaghan opened Cork’s account after 8 minutes, but the northerners continued to enjoy the upper hand. Dominic Magill stroked a nice point over from play and Seamie O’Hare put two frees between the posts. Cork came back into the game thanks to some hard work from Richard Murphy in the forward line and midfielders Derry O’Callaghan and Stephen O’Donoghue. Murphy pointed, and Arlen Ahern reduced the deficit to three points a minute later as Cork gained some footing. Colin Crowley goaled off the inside of the far post after 19 minutes the sides were level. Cork then took a one point lead and the game went from a one sided affair to very interesting contest indeed. Quinn then leveled with a superb strike. After O’Hare restored Armagh-Notre Dame’s lead with another free, Quinn.got on the end of a ball played in by O’Hare and goaled with a fine finish. Cork again got back into the game with a second goal, this time Niall Coakley finished a great move that involved Colin Crowley and Richard Murphy to make it a two point game at the break. 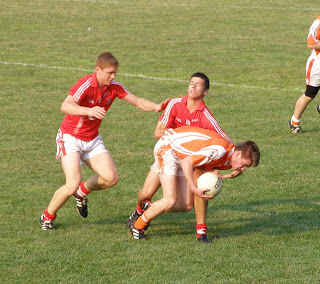