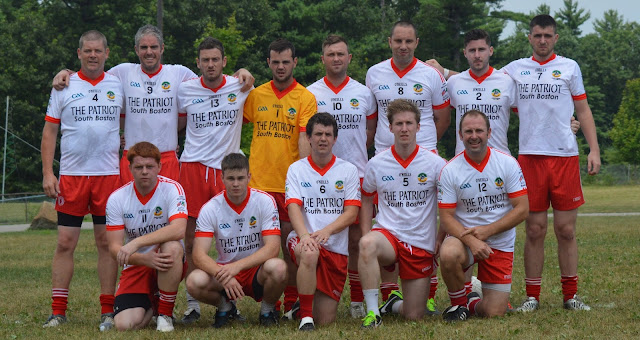 Aidan McAnespies and Mayo played a great game of football on a day that would not be described as cool, but certainly cooler than the one before.  Mayo looked like taking the full spoils from the game right up until the final moments when Mayoman, Shane Lynn, earned a point for McAnespies with a goal.  McAnespies wasted several chances to secure a win late in the game with a handful of shots at goal fizzing the wrong side of the far post.  Having trailed early in the game, Mayo played some good football and took full advantage of a first half penalty to pull themselves level just before half time.  The westerners will be disappointed not to have secured both points having led by four points late in the game.

A string of points from McAnespies got the game off to a great start for them, but Mayo got into it with center forward Sean Baylon leading the charge with the front 5.  Aiden Lynskey got Mayo off the mark with a point, and Baylon added two more to draw the westerners level.  McAnespies enjoyed slightly more of the play, and Barry Smith line pointed 3 times in a row to pull McAnespies clear.  Baylon had some chances from free kicks that drifted wide, but a penalty for a block with the foot by Ryan McCrystal resulted in a goal for Mayo.  Sean Geeney put the kick away.  Neil Donaghy drew McAnspies level with a well taken score, and late in the half McCrystal saved well from Dan Igoe to prevent another Mayo goal.  At the break it was all square at 1-5 to 0-8.

Mayo played the better football for most of the second half.  Pat O'Malley and Sean Clifford did well in the back line, while up front it was Baylon who was on the mark with his dead ball kicking.  An early goal after a pass from Igoe put Baylon through propelled Mayo into a four point lead.  Craig Oliver and Nigel Regan each had goal shots that went across the face and wide, and the gap remained at 3 points as the sides traded scores.  With time running out it was desperation stakes for McAnespies who made a big push to get something from the game.  Points from Regan and Donaghy reduced the gap to 2 points, before Baylon brought it back to a goal with a fine score.  It looked like curtains for McAnespies after Donaghy was shown a red card, but the northerners pressed on for the goal and eventually it came from the boot of to level the game at the death.  A hard earned point for McAnespies and maybe a little bit of regret for Mayo not coming away with both points having led for the entire second half.