Back from Ireland now. The weather was unreal (or unusually unreal). Bright, warm, and sunny. I felt bad for the students preparing for exams who could not fully enjoy the rare experience of sustained good weather in Ireland, since the leaving cert is only a week or two away. The roads from Dublin to the southeastern coastal resorts of Wicklow and Wexford would make Route 3 South on a Friday night in the summer look like child’s play. I witnessed the gridlock firsthand as I was heading in the other direction from my brother’s wedding, which was at the Woodenbridge Hotel in Wicklow, on Saturday last. The occupants of the vehicles must have felt trapped with no escape.

The hotel and the surrounding scenery were beautiful – and the good weather certainly accentuated the experience. Wicklow roads this time of year are also beautiful, with the overhanging trees giving the feeling of driving through natural tunnels. The downside to this is that these same roads are extremely narrow and winding and the posted speed limits of 80kmh makes one wonder whether the local council is trying to increase the accident rate, or assumes that all drivers will get the joke. 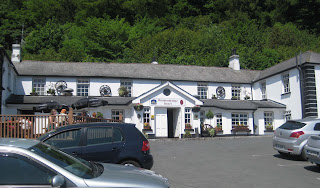 
A few things struck me on the visit. Like the trees in full foliage, lampposts and telegraph poles have sprouted an abundance of election posters. For anybody who has not been in Ireland during an election season recently, there is a certain Darwinian quality to the posters. They are no longer heavy cardboard types with a picture and two or three colours from years ago. The posters have evolved into larger, more durable, and more noticeable creatures. Election posters have adapted to the weather. They have managed to form a plastic type coating so as to endure the usual damp weather conditions and, in adherence to the notion of the survival of the fittest, are trying to outdo each other in size. These things have expanded by at least 10 inches in width and 15 in height. I even saw one blowing across rows of cars stopped at the lights at the junction of the airport road and Collins Avenue, as if to announce itself to the motorists who may not have noticed it on it’s lamppost perch. Are they also coming to life? 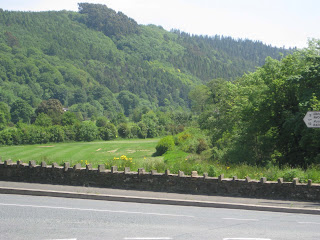 The Garden of Ireland - County Wicklow lives up the name.


The other noticeable thing, since we did a lot of driving on unfamiliar roads, was the dearth of traffic signs. Several times we relied on “following the signs” to get to our destination, a grave error. Many times we came to junctions where there were no signs in existence, so we followed our instincts. Sometimes our instincts served us well, other times they let us down. These were not minor roads either – they linked fairly large towns. On our return from Wicklow, we were heading back the way we came, up the N11 and over the Eastlink Bridge to our final destination in Marino – that was our intention. We then got to the stage where the road we were heading back on no longer resembled the one we went down on…we realized that we were on the M50. I inquired of my father what could have happened and he told me that you have to know where to get off to stay on the road you were originally on. That said, the highways around Massachusetts can be confusing, but at least there are several signs to warn you of the impending directional illogicality before you realize that by behaving logically in your choice of route you will end up on the wrong one.

On the GAA front the counties of both parents bowed out of their respective provincial championships. Roscommon put paid to the hopes of Leitrim, my father’s county. Leitrim scored two of the best goals that you will ever see, while Roscommon put away a penalty and got the good fortune of a rebound of the post to net their second. They all count however. Roscommon captain Gary Cox performed well by all accounts. Cox spent a summer here 10 years ago with St. Columbkilles – the year I was chairman of the club - (not one to remember). My mother’s county, Longford, were put to the sword by Wicklow – Wicklow featured Thomas Walsh in the middle of the field. Walsh is another veteran of Boston football. The former Carlow footballer, who now lines out in midfield for Wicklow, won an intermediate title with the Galway football club several years ago. Playing at center forward for Galway, Walsh saw the Brighton club over the line that year. I’m not sure if it is coincidental that the wedding we went to was in Wicklow or not. I was also home for a wedding in the Dolmen hotel in Carlow town a few years ago. I enjoyed both weddings tremendously. It seems Tommy prefers Wicklow to Carlow for the football, but I’m finding it hard to pick which is better for weddings.
Posted by Rory at 4:45 PM